DELHI: Railway Minister Piyush Goyal today urged the youth to refrain from taking selfies on rail tracks, days after a 22-year-old man from Hyderabad suffered grievous injuries during one such attempt.

In his message, Goyal has appealed to citizens to avoid selfies or stunts near railway tracks, reports PTI.

“In the last few days, I have seen news and videos in which there have been accidents of youth taking selfies or showing stunts near railway tracks. It is very disheartening to know about these accidents.

“You all are the future of the country and my appeal is to avoid putting your life at risk and stay alert around the railway tracks. Follow the rules and signs and pay attention while approaching rail crossings,” he said.

Along with the message, the ministry has also issued a number of posters with references from popular Bollywood songs like “Zindagi maut na banjaye sambhalo yaaron” (Be cautious, life can turn into death) from the film Sarfarosh, accompanied with images of people leaning out of trains.

There is another which says “Sun raha hai tu na” (Are you listening) from the film Ashique 2, accompanied with a picture of a young boy with earphones walking on the tracks with the message – “Listening to songs is fine, but not on the tracks.” 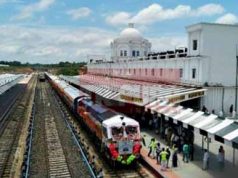