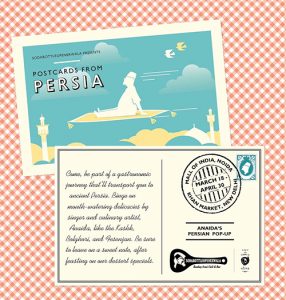 Move over Irani cafés. As any Bambaiya will testify, these wonderful outposts hark back to an era fast disappearing, and delivering a unique cuisine that many took to be that of the original land of the Parsis, Persia (Iran). Only of late has real awareness come of the difference between the two. Especially given the fact that not only are the cuisines of Iran and northwest India practically related, there are many common ancestors.

A strand of the cuisine comes from an unsuspecting source. Singer Anaida (if you are over 25, you might remember her as the ‘oova oova’ girl who topped the music pop charts in the 1990s) has a new side of her to reveal. Many other hits later, she has now veered more into wellness, conducting workshops for healing. And related to the latter is food, apparently a passion with her that few outside her circle knew about. An Iranian by descent, Anaida Parvaneh – bet you didn’t know her second name was – she is doing pop ups (that’s the new version of the erstwhile food fests) of Persian food at restaurateur AD Singh’s SodaBottleOpenerWala. which is a modern tribute to the Parsi cuisine.

The menu promises some classics of the cuisine and well, some dishes Anaida has concocted over time, as she puts it. It wasn’t as simple as following recipes though to translate it to this pop up. For one, Chef Hemant Sonar, head of the Thane outlet for the chain, visited her home in Pune to learn about the dishes.  SodaBottleOpenerWala brand head Mohit Balachandran explains not just the differences between the two cuisines as they diverged in the centuries past, but also the challenges of sourcing.

A pioneering event in Thane proved to be a great success, and now ‘Postcards from Persia’ is in Delhi at SodaBottleOpenerWala outlets in Khan Market and Noida till the end of April.

Of course, given the extensive historical connections between what is today northern India and Iran, there are no surprises that there multiple points of familiarity between the two cuisines. Overland trade routes between the two have been important for millennia, and a historical zenith was arguably reached under the Mughals when Persian was the language of the court. Fleeing Zoroastrians took more coastal routes as have more recent waves of migration, and under British rule, Bombay was the chief port of arrival.

Over dinner, the engaging Anaida held forth explaining the niceties and the twists to the dishes. While the headliners of the Iranian cuisine – fesenjan, bademjan et al are all present, the menu reveals names no Iranian would recognise. Easily the most interesting – or at least the one with the most interesting story is Soop-e-Jadooi (coriander chicken broth with pearl barley, mixed sprouts, turnip, mushroom, carrots and roasted vermicelli; ₹230) – which Ms Parvaneh conjured up for herself from her Anaida days on the non-stop pop music circuit!

“I had to travel to such places with such different weather and temperatures, and needed something that would keep me healthy.” Thus emerged the ‘jadooi’ soup, as those around her ascribed her well being to its regular consumption and apparently began to consume it themselves. With variations for taste! This one had pearl barley, mixed sprouts, turnip, mushroom, carrots and roasted vermicelli. The Salad-e-Salamat (cucumber, celery, pomegranate and carrot; ₹110) has a similar story. And yes, the singer is a big believer in positive energy and vibes, which, according to her, find their way in food.

There’s also Irani Chai (₹80)- black tea brewed in a porcelain pot and served with dates and sugar cubes on the side. Yep, all the serving cutlery is floral patterned and pink.

Two quick coolers follow – the Mast-O-Khiyar, a raita of yogurt, chopped cucumber, dried mint and rose petals flavoured with sea salt, while the bright pink Laboo Burani is a raita with beetroot in hung yogurt topped with rose petals (both ₹90). You could order any one. We recommend the former, though both are close in taste and consistency.

A dish of Irani Haleem (₹350) is next, and again, it is familiar, with a touch of the unusual. For me, it was the accompanying fried sweet onions. Unfortunately, the Irani breads it would go best with are absent.

Rice is the favourite in Persian cuisine, and it is no surprise to see multiple dishes follow. Traditionally Iranians eat communally, and the preparation and serving of dishes reflects that. The rice dishes – Chelo Kebab Koobideh (₹310) – minced lamb kebabs served on a bed of buttered saffron rice flavoured with sumac. Another rice dish is the Baghali Polo or dill and fava bean rice (₹325). Yet another option is the Lubiya Polo, minced lamb and french beans (₹450). Anaida reveals that Sonar was so involved in trying out dishes that he came up with a rice dish of his own – which is called Chef Hemant’s Tahchin, chicken marinated in yogurt and cooked over charcoal with rice flavoured with cardamom and saffron (₹425). Yes, saffron is everywhere, and straight from Iran as it the best variety, chorus all chefs.

The diverse variety of mains follow. Try the Fesenjan, a classic of the cuisine. It’s a chicken stew in pomegranates and walnut sauce (₹350).

Another favourite is the Khorak-e-ghosht or lamb shank slow-cooked in onions, chick peas and mild spices flavoured with Persian black lime among other delicacies (₹380). The lime is a big hit for all around our communal table.

A highlight is the Anaida’s Kashk-o-Bademjan or ‘Super Tasty Eggplant Roll’ (₹250). Yes, they lived up their name.

I missed the desserts, but there’s the Shirazi Faloodeh or glass noodles in lemon flavoured sweet slush (₹195), served cold with ice cream or Shole Zard or ‘yellow flame’, a Persian pudding dating back several thousand years is made of aromatic rice flavoured with saffron and almonds (₹185). Another option is the Persian Halwa made with wheat flour cooked in ghee and rose water flavoured with cinnamon and nuts is the perfect end to a Persian meal (₹180).

Authentic Persian cuisine isn’t easy to find, not just in India, but in most global gastronomy capitals. However, for any gourmand, missing this extremely rich, layered cuisine developed over centuries in royal courts would be a loss, and Anaida makes it possible to sample it at a SodaBottleOpenerWala near you! And luckily, it is new year time in Iran. Happy Nowroz!

After hiccups, nod for 3D show at India Gate

Centaur Hotel to be razed for aircraft parking