For doubters, here’s another proof that quality pays. Where else could you try Bacon Whiskey, Raunaqeen Seekhan, Kahlúa Cake, Chicken Kutthu Parantha, and much more as you push culinary boundaries?

As  The Palate Fest 2015 returns to Delhi for its second edition – there was a Mini Palate in between – the anticipation was huge, mainly because the first edition in 2014 November had been so positive. Despite food running out long before the end of the fest and surging crowds drawn to open air, live music. It has spawned a number of imitations along the way, and Delhi has been fortunate in having a number of food festivals that have highlighted its culinary riches.

As with the first edition, a plethora of restaurants from across the city, including many home chefs, are participating. Festival conveners Aditi Kapoor and Ruchi Sibal, who organised a Mini Palate in March this year, express satisfaction about the growth of the festival. “We wanted to create an event that celebrates everything we love about food in this city,” they say.

Even a quick glance shows there are far more stalls – about 100. As with last year, the  stalls are in four categories, ranging in rents from about Rs 50,000 to Rs 500,000. There are about 100 stalls, including a Market Zone, which includes most stalls on thelas or carts. The organizers suggested pricing between Rs 100 and Rs 500, something most have stuck to. Each restaurant has seating arrangements. There are some common seating areas as well. 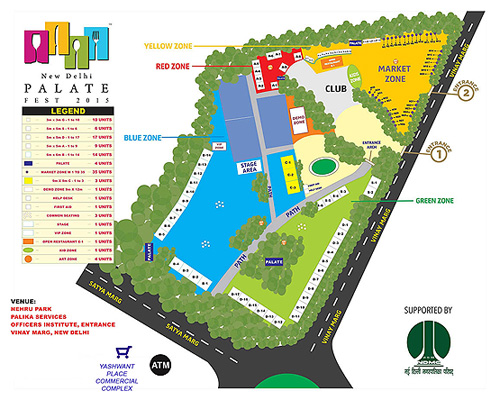 There are changes however.  Yes, it is still in Nehru Park, but not in the same location. The park is huge, and instead of last year’s lush green lawns, this year most of the stalls are in rather muddy, dusty parts of the park. Not good for those whose food is being displayed in the open, or being cooked in the open. The shift was last minute and on the behest of the NDMC, the venue partners, according to reports. The festival area covers about 9 acres of the park, down from last year’s 16 acres. It is divided intozones for picnic, pop-up restaurants, kids’ playing area and a market zone with smaller stalls where you can shop for gourmet jams, organic juices and baked goods.

The festival was inaugurated by Union Tourism and Culture Minister Mahesh Sharma at Nehru Park here. “The festival is open to the common man,” he said. “We cannot imagine visiting a 5-star restaurant every day. I appreciate the efforts and vision of the festival organisers.”

An appreciable outcome is the exposure it gives to a diverse set of people to the many new cuisines that are setting up shop in Delhi – and not at their basic, dumbed down, Indianised versions but at a sophisticated level. Just how much of a profit the eateries and shops do here is difficult to estimate – they have paid to participate – but they are sure to accrue many new customers who get a taste of what they could expect when they visit the actual premises. If the snooty NFC customer will not go to The Toddy Shop in HKV (oh wake up and learn the lingo – you will need it survive in a couple of years), well the latter is here with is wonderful menu! Chinese, Japanese, Turkish, Lebanese, French, and whole lot of other cuisines are present. The spread of regional cuisines from India is a little less, but then that’s the case with the city too.

The list of restaurants is even more extensive. Farzi Café, Fat Lulu, Habibi’s, Royal China, Keventer’s, are among the repeat participants. Among the NCR’s hotels on show are ITC Maurya, Dusit Devarana, Taj Hotels, Leela Ambience, Kempinski Ambience However many embassies that participated last year are missing.

The participating restaurants include a number top flight hotels that have prices their offerings much below what they would charge at their hotels. Many have taken pains to recreate the look and feel of their restaurants. Kempinski Ambience for example has recreated its Dilli 32 restaurant in its decor, and is offering their signature dishes such as at Rs 150 to Rs Rs 200 for vegetarian and non vegetarian dishes. This is for reaching out, says the spokesperson. Do not miss out on the Kacchi Mirch ka Paneer and Nehari Gosht. Or the banta, at just Rs 50!

Sibal and Kapoor are looking to expand the festival geographically. They tried out a smaller version at IFFI in Goa this year, and hope to be present in a bigger way next year. Their next step is Chandigarh, in December. They are also looking to take this abroad, though finite timelines on this are yet to be decided. Meanwhile, as they rush around attending to last minute glitches, Nehru Park is already beginning to fill up!