DELHI: Yatra.com, one of India’s leading online travel portals, conducted their annual monsoon survey which brings into spotlight the changes in the way Indian travellers are planning to holiday this monsoon.

Back in the day monsoon was considered as a traditional lean period for travel, but with nearly 81 per cent respondents planning to travel during monsoon, it validates that Indian travellers’ travel patterns are evolving.

Another major finding from the survey showcases that 69% people would prefer to travel by air rather than travel by road to escape the hustle bustle of the season.

As an impact of GST, the survey revealed that a significant number of 56% of the respondents said that their preference of luxury travel has been adversely affected as against 48% who were willing to spend more than Rs.50, 000 per person on travel which was revealed in Yatra’s annual summer survey 2017.

One of the key observations derived out of the monsoon survey was also that a whopping number of 43.5% respondents are willing to spend Rs. 2,500 – Rs. 5,000 on accommodation per night.

While a majority of 47.2% of the respondents are looking to travel for 1-4 days, 45.9% of the people are planning their vacation for almost 15 days. This indicates that monsoon travel has gradually become a popular travel season.

As a result of the frequent airline flash sales, more than 37% respondents booked their tickets at least 1-3 months in advance.

Monsoon also seems to be the family bonding time with over 76% respondents looking to go for family vacation.

Almost 73% people are seeking unique experiences in India over holidaying at international destinations.

While Goa and Munnar continue to be the prominent choice, north eastern destinations have emerged amongst the top choices of travellers this monsoon.

The survey also finds that 43% Indians believe that relaxation during holidays is the key reason to travel, underlining the urban Indian’s need to escape the grind of everyday life.

The findings further suggest that a swooping 80% people prefer to make payments via plastic money. With 57% responding opting for ‘staycation’ during long weekends, the survey reveals a mini boom in this category.

Commenting on the findings from the survey, Sharat Dhall, COO (B2C), Yatra.com says, “Individuals, these days, are taking more frequent vacations to unwind from their daily routine. It is very encouraging to see that once what was labelled as an off season is now becoming a popular travel period especially due to the upcoming long weekends. We have also seen an increased demand for newer destinations this monsoon with places like Kerala and Andaman & Nicobar Islands making it to our top five domestic destinations. While luxury travel has experienced a hit due to GST, we expect things to be back to normal soon.”

An interesting finding reveals that Mumbai is the one destination that 35.6% people would avoid visiting in monsoons. Over 40% respondents would not leave for a relaxing vacation without umbrella/raincoat this monsoon.

• To escape the mundane of city life, this monsoon 72.8% people would like to opt for exotic locations in India

• Post GST announcement, 3-4 star hotels are preferred by over 30% travellers

• Leisure activities remain the favorite activity for over 40% travellers

• For vacations, 80% travellers would like to pay through card (debit or credit)

• For 56.2% travelers, their luxury vacation plans have been affected by the introduction of GST in the country

• Mumbai is the one destination that 35.6% travellers would avoid visiting in monsoons

• During long weekend, 57.2% travellers would like to opt for staycation over trekking or biking

• Samosa with chai remains the ideal monsoon snack for 35.3% Indians 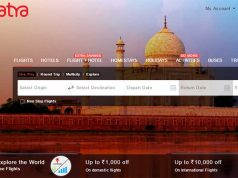