Let’s quickly see if you are familiar with their charms. Cherrapunji – possibly the wettest place on earth? Check. Brahmaputra – India’s largest river by volume? Yep. Shillong – the city of trendy cool music? Absolutely. Kaziranga – the home of the Indian rhino? Of course. Tawang – that spectacular monastery town on the edge of India. Wish I could go.

Well, the north east of India has been present in India’s subconscious for many years, even as it remained a regional Shangri-la for tourists. Indians who have visited have been vowed by not just all of the above, but many other splendours, including the living bridges of Meghalaya, the imposing palaces in Agartala and Coochbehar, the serene Loktak Lake, the vibrant Hornbill Festival….

Yet in terms of planning for tourism, the North east of India has simply not been on the radar. Many reasons abounded. For domestic tourism, the numbers were just not big enough even in prime mainland destinations so low hanging fruit came first. Major cultural differences meant awareness almost non existent, food unfamiliar, and mass tourism absent. Foreigners till recently had to get a prior protected area permit (PAP) for heading to Manipur, Nagaland and Mizoram. 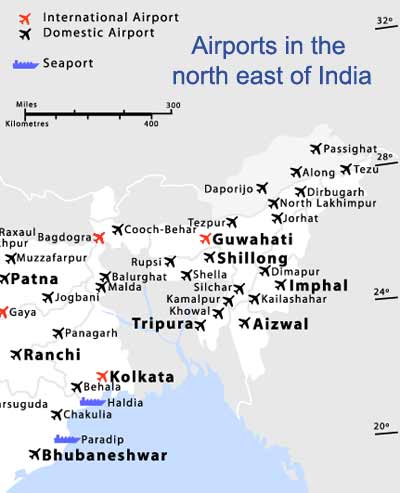 There is a new greenfield airport at Sikkim ready to open in Sikkim – Pakyong. There are many smaller airstrips, but none have commercial scheduled flights.

Railways and roadways have been neglected too. Even though railways extends to almost all the states, service quality is generally suspect. Road conditions are pitiable in most parts and a heavy monsoon and poor upkeep makes things even harder.

Tourism numbers are good indicator. In 2011, when Uttar Pradesh and Andhra Pradesh got over 15 crore domestic tourists each, Assam had 43 lakh domestic tourists and 16,000 foreign visitors. Other states such as Meghalaya, Nagaland, Mizoram, Arunachal Pradesh and Tripura collectively received around 12-14 lakh domestic tourists, while the number of foreign tourists in these states was negligible. Manipur, Tripura and Nagaland have notched 20%-29% more foreign tourist arrivals while Arunachal Pradesh and Nagaland are celebrating 36%-41% increase in domestic travellers, of course measuring from an extremely low base. The ministry’s count of numbers is slow at best and even if the numbers have grown slightly in the next couple of years, the growth hasn’t been spectacular as all close to the ground will testify. Altogether the region sees just about one per cent of tourist arrivals in India.

However there are signs of improvement. The Vision 2020 document released by former Prime Minister Manmohan Singh in 2008 for the Northeastern region earmarks infrastructure-led tourism development as one of the primary hopefuls for revenue generation.

Accommodation has been a major issue. The entire north east has no branded hotel. The first Taj hotel is about to open in Guwahati, while the DS Group has also built a hotel there. The north-eastern states offer a lot of budget accommodation, which is an important draw.

Security had been an issue, though in popular perception these destinations are now safer now.

The Ministry of Development of North Eastern Region (DoNER) has a minister now. In 2008, the NEC (Northeastern Council) formed the North Eastern States Tourism Forum (NEST) with representation from the various states to coordinate intra-state and inter-state tourism plans, such as consolidation of circuits and marketing. However politics has not been helpful and the malaise of corruption has stung this area badly too.

A combined vision for tourism in the region is arguably the most important element for its successful implementation, indeed, its centrality is even acknowledged in the tourism policies of the Northeastern states. The tourism policies of these states do not have a targeted tourist niche or market. They are unfocused, promoting adventure tourism, wildlife, tea-gardens and World War II nostalgia tourism with the same approach.

Southeast Asia holds great prospects for the Northeast as a market and vice versa within the ambits of the Indian Look East Policy (LEP) and the Vision 2020 document, which deals with the international facet of tourism promotion.

Although all the Northeastern states have tourism websites, which are inevitably they are generally not user-friendly. Also tour operators from the rest of India rarely promote this region.

Northeast is not ‘geared up for tourism’ has been the refrain. Well, the present government has prioritised both tourism and the development of the region. The tourism policies of the Northeastern states are well-meaning in their aims. However, despite the collective keenness in tourism development, the translation of assurances from paper to reality has yet to be realized. Hurdles such as political will, publicity, infrastructure and administrative and security review and reform are still awaited as is the lifting of AFSPA from Manipur and Nagaland. Each of these will be crucial for the successful execution of a dynamic tourism policy.

Small cities to be linked with air services: Govt