Armenia is one those nations whose past, and past extent, has been far more glorious. A country of just about three million citizens today, its diaspora numbers about eight million. Great traders by tradition, many leading ports of past centuries had Armenian quarters, much like Chinatowns. In India, look for connections in Kolkata, Bombay and Surat. If you are served dolma, know that the word comes directly from distant Armenia.

Armenia’s location, at the crossroads of Asia and Europe, has meant centuries of strife, with a current conflict still simmering with neighbour Azerbaijan. Relations with Turkey are not the best either. As the first country to declare Christianity as state religion in the fourth century, in a region where Islam would later establish its roots, meant intensified conflict and resultant fortress-monasteries.

Centuries of global influences show up in the cuisine. Religions conflict apart, the region does share its cuisine, and you could be forgiven for thinking this cuisine is first cousins with Lebanese or Greek, or Arabic or Turkish. As should be more recognised – faiths divide, food unites!

What do Armenians eat?
Armenia is now a modern country, or headed there. Breakfasts have now got more westernised, the distinctly Armenian touch is there in other meals of the day. Lunch is usually lighter for townsfolk, and about two thirds of all Armenians today live in towns, with half the country’s population in capital Yerevan. Dinner, or supper is post office time, peaking between 5 and 7 pm. While home meals are unquestionable more authentic – read traditional, access to one may not be easy, and many outlets do versions of the Armenian meal – restaurants are more elaborate and bistros serve the essentials, but are much cheaper.

Regular meals for most people are effectively two courses. This will be preceded by cheese and salads usually tomatoes, onions, cucumber, fresh herbs. Before you sneer, it is difficult to put down juicy, plump Armenian tomatoes, and is usually the first thing to finish at any table! Of course lavash, and other breads, are ever present. Lavash, huge paper thin breads prepared in clay ovens, are flexible and are a must at every meal. Interestingly, dry lavash is sprinkled with water to make it soft! There’s really little to match a fresh warm lavash straight out of the oven though. You have to tear it with your hands, roti style, though you can also roll it or stuff it or crush it in soup.

The first course is usually soup, and again the nation is proud of its enormous range of soups. The national favourite is khash, made of, hold your horses – cows feet. A safer bet is spas, of yogurt, greens and herbs, though a variant with burghul, cracked wheat is seemingly bland but slurp worthy too.

The main dishes, yes often more than one, could consist of meats or occasionally fish, with sides of vegetables. Aubergines and pumpkins, rule, much like in Italy or Lebanon, but here the mixes with other ingredients quite different, especially the way these are combined with lentils, white beans, lemon juice, olive oil, herbs and a wide variety of nuts. Walnuts, almonds, pine nuts and hazelnuts are most common, and used crushed and whole, roasted, fried, salted, sweetened… Potatoes can be deep fried or baked or grilled or roasted, and usually not combined.

A star is khorovats, barbecued or grilled meats, usually prepared in tandoor type furnaces in the ground, are everywhere. Do not miss. It is usually prepared with the bones, especially for lamb and pork. Armenia is landlocked today, though it has a huge, and spectacularly beautiful lake – Sevan, within its territory, seafood is understandably scarce.

The stress is on freshness of ingredients. Interestingly, most food is ‘organic’, not because it is a fad, but recent history post the collapse of the Soviet Union saw the Armenian economy collapse. The ratio of employment in agri sectors actually increased as people were forced back into subsistence agriculture, minus chemicals! Enjoy the rare freshness of its fruits and veggies while you can!

Differently used herbs, fresh in summer, dried in winter, add flavours. Expect wide use of parsley, mint, dill and tarragon. For dressier dishes, add cloves, cinnamon. The average Indian may find the use of spices fairly sparing. Pickled cabbage, cucumber, cauliflower, carrots, garlic, and even ladyfinger often will get served.

Meals can often end with dessert – in the shape of brandy! Though wimps can have baklava and wide variety of fruits – apples, oranges, grapefruits, quinces, melons, apricots, grapes, plums, peaches, pears, and the top choice, pomegranates. Accompanied by dry fruits. Armenia is famous for its brandy – called konyak, and Ararat and Dvin are the most famous brands. Wine is popular too, but hardly sees the kind of passion and boisterousness that a bottle of Ararat (yes, named after the same mountain that Noah of the ark decided to anchor on. Mount Ararat is today in Turkey, but spiritually claimed by Armenians, who can gaze on it anytime they look up.)

Well, Armenian cuisine goes well beyond. To explore the thousand soup varieties, or meats, try an Armenian restaurant near you. It won’t match up to what Armenia itself offers. 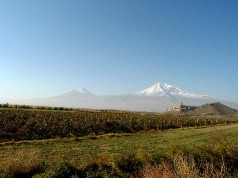