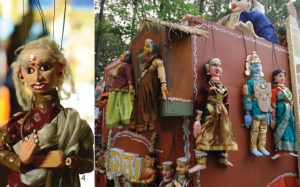 BENGALURU: The stage is set for wooden dolls on strings, dressed in vivid colours, to take the ancient art of storytelling through puppetry into a new year and to a new set of audience.

The three-day Dhaatu International Puppet Festival will be held from January 5 to 7 in the city, reports The Hindu.

Entering its fourth successive year, the festival will also have on display puppets that are over 200 years old, along with puppet parades and performances at various locations. The event is being supported by the Union Ministry of Culture, State Department of Tourism, and The Cultural Forum of Austria. The entry fee for all these shows are covered by the government and Dhaatu themselves.

Anupama Hoskere, director of Dhaatu, said, “The aim of the festival is to engage in an exchange of art and learn from each other. We will have both international and regional puppetry groups showcasing their arts.”

More on the festival here

Fans give KSRTC deluxe a makeover