Indian Railways is finalising a branding policy for trains, coaches, stations and even consumables such as bedding, an initiative that’s expected to raise as much as Rs 9,000 crore for the cash-strapped organisation.

A task force headed by Railway Board member (traffic) Ajay Shukla will submit a detailed report on the issue by April 30 to finalise a comprehensive commercial publicity policy and its operational framework, reports Economic Times.

The task force was formed by railway minister Suresh Prabhu after engineering consultancy RITES Ltd estimated earnings from the avenue at the figure above in a study.

“The minister is open to the idea of auctioning names of stations and even trains to corporates,” an official said. “So you could also have an ET Mumbai-Delhi Rajdhani.”

The RITES study in consultation with the advertising industry said the railways could earn as much as Rs 780 crore a year by selling advertising space on 26 Rajdhanis 20 Shatabdis and 32 Duronto trains alone. “These trains combined offer advertisers 4 lakh captive eyeball contacts of passengers, plus 80 lakh casual eyeball contacts, in addition to premium branding rights,” the report said. 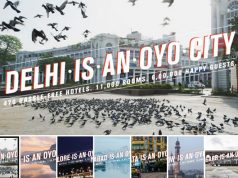 Bengal gets its tourism Sandesh through

Vietnam to try branding via Bollywood to get tourists

Vietnam to try branding via Bollywood to get tourists

Video: Is travel your heart’s desire too?