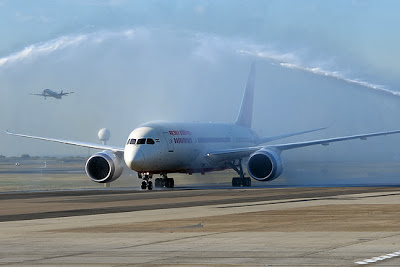 On Monday,  the airline experienced glitches on two separate Dreamliner flights.  On a London to Delhi flight, the aircraft’s pilots received a warning about a possible fault with the brakes as they prepared to land in the Indian capital. On another Dreamliner between Delhi and Sydney, the aircraft developed a crack on its outer windshield while landing in Melbourne for a stopover.

“It was later found that there was no fault in the brakes. There was an issue with the warning system, which is being looked into,” an airline spokesman told India Real Time. The aviation regulator has initiated a probe into the incident.

Another spokesman for the airline said the outer windshield on the Delhi-Sydney flight cracked because of variations in temperature. He said the Dreamliner, which has been grounded in Melbourne, will likely take off later Tuesday after the windshield is replaced by an airline engineering crew from India.