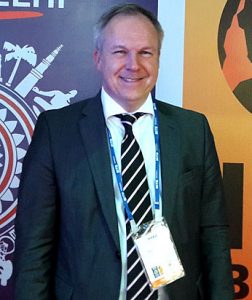 For those in tourism sector, there is no bigger name than ITB Berlin. For a serious player in the sector, you have to be seen there. Let’s see the scale of what we are referring to. ITB Berlin (Internationale Tourismus-Börse Berlin), a mega annual fair that in its latest edition earlier this year saw participation about 10,000 exhibitors from 187 countries. It has an extension, ITB Asia, held in Singapore, and is starting ITB China in Shanghai in 2017. And now there is BITB (Bharat International Tourism Bazaar) powered by ITB Berlin. Not quite ITB yet, it is nevertheless a major step in that direction. The next edition of the fair is slated for September 2017. David Ruetz, Exhibition Director, ITB Berlin explains to Suman Tarafdar whether ITB India will be a reality soon in a chat on the sidelines of BITB. Excerpts

What is the potential of the Indian tourism market to have an ITB?
India is one of the fastest growing and largest travel markets in the world, and the potential has been apparent for a while. While the Indian outbound market has been growing steadily, there is some work to be done for inbound tourism.

How is ITB connected to BITB and how do you compare the two?
For this event, it is a marketing and networking partnership. ITB Berlin’s main focus is to support the Indian tourism sector. When it grows, we can imagine that ITB Berlin will take it over.

ITB has always been committed to facilitating business worldwide and disseminating knowledge about the sector, and we hope to do the same here too. We always have a conference at ITB, and I am glad to see this is being held here too. When we give our hand in partnership to any event, we have some quality standards in mind.

We see relatively low participation here. Is that a concern?
Participation, especially from international national tourism organisations or NTOs, is low as most had already tied up their budgets much earlier and this fair was conceived and executed in a hurry. As you know, especially for international participants, budgets for participation in fairs is decided more than a year in advance often.

From what we see, the fair looks like a success. ITB Berlin too started small. The pioneer spirit is important.

How do you think BITB will stand out in the fairly crowded Indian tourism fair space?
The knowledge component of the fair, which has six in-depth sessions with participation from industry leaders on different tourism related verticals, will help distinguish the fair from its rivals.

The competition is stiff, but especially in times of crisis, the industry trusts known names, the main platforms.

Is Delhi ready to join the annals of major convention cities?
I think so. I am excited about Delhi being a venue for this event. An event such as this, which brings high value conference visitors to the city, who studies have shown, spend three times as much as the average visitor, should establish Delhi in the league of convention cities. Delhi is cosmopolitan, has hotels, shopping, history, attractions etc. It is seen largely as a safe destination, and a range of hotels makes it ideal as a convention host city.

ITB China is starting next year. Will ITB India also be able to take off in the same year?
We can’t compare China and India. Both are outbound markets, but very different. In India, there is big opportunity in the outbound market. In the inbound segment, there is some work to do yet.

By when do you see this fair being a full part of the ITB family?
We’ve got a son-in-law. As it grows, we, and Navin Berry, the organiser of the fair, foresee this transforming officially into ITB India soon. There is no date set for this however. When it bears the name ITB, it will be our show.