CHICAGO: Shares in United Airlines’ parent company plummeted on Tuesday, wiping close to $1bn off of the company’s value, a day after a viral video showing police forcibly dragging a passenger off one of its plane became a global news sensation.

When the sharemarket opened in the US the stock dropped more than 3 per cent to $69.17.

The value of the carrier’s holding company, United Continental Holdings, had fallen over 4% before noon, close to $1bn less than the $22.5bn as of Monday’s close, according to FactSet data.

Investors have fears for United after images of a bloodied passenger being forcibly removed from a flight in Chicago went viral.

The man, who has been identified as 69-year-old grandfather Dr David Dao, who said during the incident that he was being targeted because he is Chinese.

The incident drew condemnation in China as it emerged that the passenger was a Chinese man.

Video of the violent incident posted on China’s popular Twitter-like microblogging service Weibo had been viewed more than 210 million times by late Tuesday.

In a video clip, the dazed man chants ‘just kill me, just kill me’ as blood pours from his mouth.

Many responded with outrage over perceived ethnic bias against the passenger and some called for a boycott of the US-based airline.

State-run media fuelled the anger with reports that noted the unidentified victim was an “Asian passenger.”

United does considerable business with Chinese passengers and a consumer boycott could cause serious pain.

United says it operates more non-stop US-China flights to more cities in China than any other airline.

Airline CEO Oscar Munoz has been criticised for his tone-deaf explanation about the incident.

He said Dr Dao had become “disruptive and belligerent” after he was asked to leave the plane to make room for several employees of a partner airline who wanted on the flight. 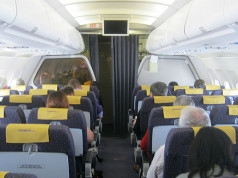