KOCHI
Fort Kochi – once a much-sought after destination by foreign tourists — is slowly becoming another Kovalam.

The condition of the heritage locale that saw footprints of Portuguese, Dutch and British has turned from bad to worse, despite the District Administration promising to evict encroachers in anticipation of Christmas-New Year peak tourist season. Encroachers and unscrupulous vendors are thronging the locale, hampering a proper view of the beach. This has turned what was once a preferred destination for discerning tourists, into a chaotic locale.

“The once silent and clean locale has fallen into the hands of organised encroachers who litter the area. This could be among the reasons why Prince Charles, who visited Mattanchery in early November, decided against visiting Fort Kochi, which is the earliest European settlement in India. Sadly, Kerala Tourism, DTPC and Fort Kochi Heritage Conservation Society are doing nothing to evict encroachers, enforce heritage norms and tidy the place,” said a tour guide. 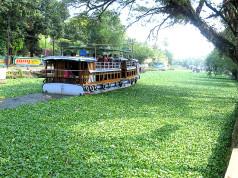 Muziris project to get boost