HYDERABAD
Tourism appears to be in full swing in the city with people from other parts of the country arriving in droves to Hyderabad. Since last week, historic sites and museums in the Old City have been packed to capacity, with most witnessing a two-fold rise in their tourist inflows.

Though the first few months of the year saw a considerable drop in the influx of tourists due to agitations and disturbances related to state bifurcation, the ongoing holiday season in other parts of the country has brought back the hustle and bustle at the sites. If the majestic Chowmahalla Palace and Salar Jung Museum were swarming during the weekend with visitors struggling to find parking space for their four-wheelers, Charminar amd Mecca Masjid were mobbed.

The situation was much the same at Golconda Fort and Seven Tombs. Last weekend, Salar Jung Museum saw 17,000 visitors against the usual 8,000 visitors. Chowmahalla Palace saw the number of tourists shooting up from 500-600 to 1,200-1,300 a day.

Officials at these sought after sightseeing destinations in the state capital said that the inflows have shot up significantly owing to the ongoing holiday season and year end. “We have noticed a substantial rise in the numbers. Last weekend, we got 17,000 visitors which is huge,” said A Nagender Reddy, director, Salar Jung Museum. He added that the average number of visitors normally on weekdays hover around 2,500. “We are getting people mostly from the eastern part of the country. So far, it has been a good year,” Reddy added. 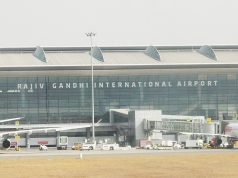 5 museums from India among top 25 in Asia: Report