Speaking to ANI, Alphons also cited instances from other countries to drive home his point. He said, “Shooting incidents happen regularly in USA & terror attacks in Europe, do we call those countries unsafe to travel?”, reports DNA.

External Affairs Minister Sushma Swaraj sought a report from the Uttar Pradesh government and sent her officials to see a young Swiss couple with a skull fracture and a broken arm after they were attacked at Fatehpur Sikri near Agra .

The police arrested fivepersons for the brutal attack that sparked widespread outrage on Thursday with two other senior central ministers reacting sharply — one of them seeking immediate action and the other calling the incident a matter of shame. The Swiss Embassy has also reached out to the victims.

The police said four men made lewd comments to Quentin Jeremy Clerc and his female friend Marie Droz, asked for selfies and later threw stones at them. The couple was also attacked with sticks. Clerc had a fractured skull, while Droz’s arm was broken in the attack.

“I have just seen this. I have asked for a report from the state government. My officers will reach them (the couple) in the hospital,” Swaraj said on Twitter on Thursday.

The crime came to light a day after the conclusion of the ‘Paryatan Parv’, India’s biggest tourism festival. The attack was described as a “matter of shame” by Union Culture Minister Mahesh Sharma, who held the Tourism portfolio before a recent reshuffle.

Clerc, 24, came to India on September 30 with Droz, also 24. Doctors at Apollo Hospital in Delhi where the couple has been admitted said that they were recovering. 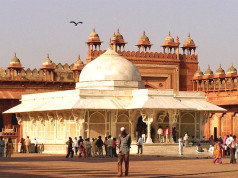 Direct flight services between UP cities to be launched soon