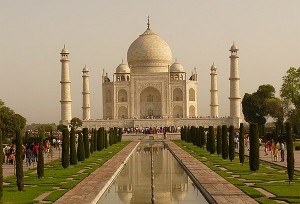 AGRA: In what many see as damage control by the BJP after a string of controversial remarks by its leaders about the Taj Mahal, Uttar Pradesh chief minister Yogi Adityanath on Thursday visited the monument, broom in hand, and took part in a mega cleanliness drive to promote Swachh Bharat Mission, reports The Times of India.

Adityanath’s visit to the 17th century monument is the first by a BJP CM of the state. When the media asked him about his experience at the Taj, where he spent about 30 minutes, the chief minister didn’t say a word but smiled and showed a ‘thumbs up’ sign amid loud chants of ‘Bharat Mata ki jai’ by his supporters and party workers.

Later, addressing the media at Soor Sarovar Bird Sanctuary, Adityanath was candid in admitting that the cleanliness drive was an attempt to show the “clean intentions” of his government to safeguard the monument and promote tourism.

“This should be enough to silence our critics,” he said.

At another public meeting at GIC ground, the CM said, “Only casteist forces have a problem with me visiting Agra. People with a divisive agenda are trying to divert the state from the path of development by giving a communal turn to every issue.” He did not name anyone while mentioning these “divisive” forces.