UDUPI: Plans are afoot to develop the yet untapped Padukere beach near Malpe here as a major tourist destination in the district.

Reaching Padukere itself was difficult till a couple of months ago. It is located on a peninsular land and one had to travel for about 14 km by road or catch a boat to reach it, reports The Hindu.

But, after the opening of the ₹16.91-crore Malpe-Padukere Bridge in March, Padukere is now just 5.5 km from Udupi town.

Though the nearby Malpe beach attracts huge crowds during the season, the Tourism Department intends to develop Padukere beach with greenery around as a major tourist spot.

Already, the committee has allocated ₹52 lakh for the construction of a concrete road at Padukere, while ₹27 lakh has been provided for laying of interlock tiles and other amenities such as installation of benches and dustbins on the beach.

“The laying of interlock tiles and other amenities will start in September and will be completed by the end of the year,” Anitha B.R., Assistant Director of Tourism, told The Hindu.

“Padukere can be developed as a beach where people come to spend their time in a quiet and leisure manner,” Sudesh Shetty, Developer In-charge of Malpe beach and St. Mary’s Island, said. Meanwhile, the Tourism Department has got proposals seeking to provide boat service to the nearby Darya Bahadurgarh Island (also called Bhadargad Island), where a fort is located. “We will have to get clearance from other authorities for this and also do a feasibility study on whether this can be provided,” Ms. Anitha said. 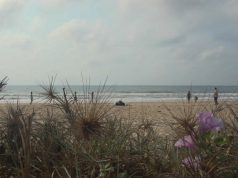