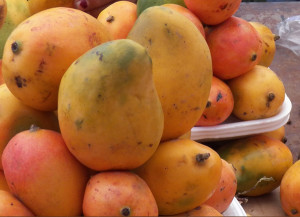 Mangoes are Indian, and we have the best ones, right? Growing up in Delhi, there wasn’t even a doubt. It was just as established a fact as irregular electricity or single channel television. Like so much that has changed so fast, this paradigm is under serious attack too! North Indian, or no, Delhi mangoes are not the best!?!

Now Pakistani PMs regularly send over their ‘best’ Anwar Ratol mangoes annually to India’s top politicos – with the not so subtle message that they are the best mangoes in the world. Ignoring for the moment that Ratol, or er… Rataul is in Baghpat, the Jat heartland and very much in India! Mumbaikars swear by the superiority of the Alphonos.  Kolkatans have their Himsagars. Lucknow has safedas….

So which is the best mango? A quick survey among friends and colleagues made me realise just how much we Dilliwalas love our chausas and langdas but how awareness of the fruit’s presence outside their immediate ken.

Unlike the potato, tomato or chili, the mango is a native of the subcontinent. Most agri historians agree though that the earliest traces are found in what is today eastern India and Myanmar. Mangoes were domesticated in India, and spread to East Asia around 400 B.C. By the 10th century, mangoes were cultivated in East Africa, and reached Philippines in the 15th century, says the wise internet. Much like their role in spreading the potato, tomato and chilli, the Portuguese then spread it the rest of the world, only this time taking it to the ‘New World’, a reverse flow. That the mango charmed all is evident from the Ain-e-Akbari’s records of mango qualities and varietal characteristics. Lots of other historical texts, fictional or otherwise, have honourable mention for the mangoes too

Indeed, the modern name comes from – no, not the Spanish fast fashion brand, but Portuguese manga. That in turn came from Malay mangga and the Tamil mankay. Its scientific name – Mangifera Indica – still acknowledges its roots. But there’s also the Mangifera sylvatica, Mangifera odorata, and Mangifera zeylanica!

India has about 1,200 varieties and produces about two fifths of the annual mango produce annually. But have Indians not pushed the envelope enough on how we consume our mangoes? North Indians most commonly have ripe mangoes as fruit itself, with an afterthought of mango shakes and lassi and in flavoured icecreams. Raw mango in pickles and chutneys and aampapad are now increasingly store bought rather than grandma prepared, but still reasonably popular. Further afield, in Andhra or Karnataka, raw mango rice or mamidikaya pulihora / mavinakayi chitranna are a tangy specialty that those unaware are missing out on. Maharashtra may be known for kairee, its most famous recipe have sidelined the mango to well a side dish, the aamras! Gujarat has its chunda.  Bengal too tends to use the raw mango for chatni, or occasionally kasundi. Neighbouring Odisha’s amba khatta may be spicier, it isn’t all that different.

Recheck. Mangoes are consumed in curries, rice dishes, chutneys, pickles, shakes, and yes, as fruit – even raw, green oh-so-sour forms. But have you tried grilled mango jalapeno? Or the mango poppy seed chicken salad? Or even the mango chicken stir fry? As raspados, smoothies, aguas frescas or in pies? Maybe you prefer the white chocolate mango mousse. You just cant pass up a mango upside down cake.

Yes, the mango may have originated in the neighbourhood, but it has spread, and today many regions in the world have developed their own recipes around the mango, which owe little or nothing to their genesis. Indian mangoes apparently account for less than a per cent of global trade in the fruit, probably a cause of mango insularity in the subcontinent. Indeed before travelling to distant shores, I had no idea of the mango diversity either.

Mangoes are pickled with fish sauce and rice vinegar in many parts of south east Asia. Philippines, where like India and Pakistan, the mango is the national fruit too, mangoes are had with bagoóng, a condiment of fermented fish! On a very different track, dried strips of sweet, ripe mango, often combined with seedless tamarind to form mangorind, are also popular. Thailand has adapted the mango widely – from ripe mangoes served with sweet sticky rice to mango salads in a vast variety of combinations – most popularly chicken, or with pork chops. Yes, there are dips too! Mangoes go well with grilled stuff, whether chicken or scallops too, here. Or stir fried! Indians, with their rather territorial views on this ‘king of fruits’, are amazed by the combo that is Khao Niaow Ma Muang. Repeat orders are de rigueur!

China’s mango chicken preparations are significantly different. A top fav here are the wide variety of mango puddings though, alone or in combinations with coconut or sago or passion fruit. Central America sees green mangoes combined with salt, vinegar, black pepper, and hot sauce, or with toasted and ground pumpkin seeds (pepita) with lime and salt. Much maligned Haiti is reputed to produce the best mangoes in the region, round red ones that Americans covet. In Brazil you will get mangoes as part of the feijoada. In tropical Africa, the mango fool is a favourite. Or discover the beef in wild mango kernel sauce. Mangoes and bananas get along very well in Nigeria, especially in sundaes!

The mango is rich in nutrients such as fat, carbohydrates, protein, and also has Vitamin A, C, E, K, Thiamine, riboflavine, Niacin, folate, choline, calcium, iron and magnesium. Yes overindulgence could make you put on weight, put then overindulgence in anything isnt good, is it. Instead of consuming more in the same way, its time Indians learnt that there are multiple ways to relish the deliciousness.

Gujarat to announce new tourism policy within a month