OPINION: The sky is blue? For most young urban Indian kids, especially in Delhi, they take this statement to be almost an urban myth. Over the past decade, Delhi’s sky, once a beautiful soft blue in winter, has been displaying shades of grey not easily seen outside 19th century industrial hubs of Manchester or Liverpool.

When Indians signed up for the development story more than two decades ago, nobody thought of ensuring that the trajectory would impact the nation’s air and water. Weren’t they a given? Unfortunately, as the trajectory of industrialisation has shown, pollution of air and water and food are corollaries. 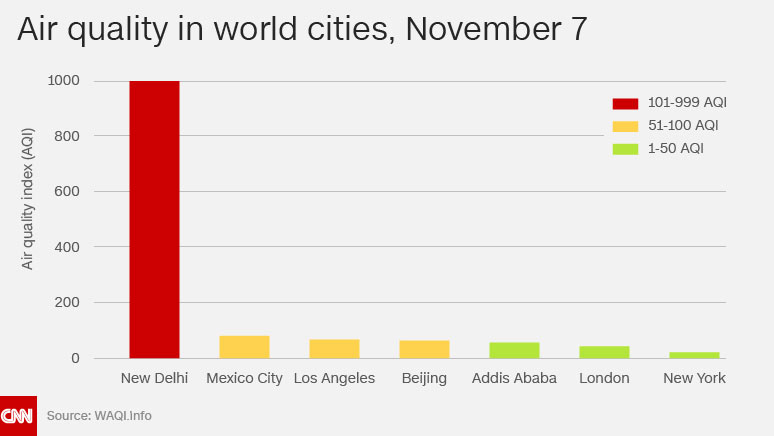 WHO has established guidelines for air quality. For particulates less than 10 microns wide (PM10), the critical threshold is 20 micrograms per cubic metre as an annual mean and 50 mpcm as a daily mean. WHO suggests that a reduction in PM10 from 70 mpcm (a common level in developing cities) to 20 mpcm could result in a 15% decrease in pollution-related deaths.

Air pollution, which is one of the top ten killers in the world and fifth leading cause of death in India, is responsible for about 10,000 to 30,000 deaths annually in Delhi, a report by the Centre for Science and Environment said in a report titled ‘Body Burden 2015: State of India’s Health’ released in 2015.

Globbally, an estimated 6.5 million deaths are attributable to air pollution each year, according to the International Energy Agency.

WHO’s recently released country statistics show that the gap between developed and developing countries is growing, point out Asit K Biswas, visiting professor at the National University of Singapore and Kris Hartley, lecturer in urban planning at Cornell University. Even in Asia. In the 22 largest cities in Japan, South Korea and Taiwan, the annual mean for mpcm of PM10, an average of 37, exceeds WHO standards by only a modest margin. In contrast, the average for China’s 23 largest cities and 122 Indian cities far exceeds standards.

Of course, there are direct impacts on the economy (besides earlier deaths of course). Among the sectors directly impacted is tourism. Not only do fewer tourists come – witness the declining inbound tourism to Taj Mahal, itself impacted by pollution. During the ongoing smog spell in Delhi, unprecedented for its off the chart pollution levels, Assocham released a survey suggesting five to 10 percent of the national capital’s workforce had called in sick due to respiratory problems. Tourists are already shifting bookings to the hills, or even cancelling bookings. Many flights were diverted. Schools in the city have been closed for the week since Diwali.

Of course, air purifiers, gas masks, inhalers, nebulisers and medicines for asthma are the hottest selling items in the city right now. Not quite the desired economic impact!

The World Bank has pegged the cost of air pollution globally at $5.11 trillion in welfare losses, a figure that has grown as developing countries rapidly urbanize. In South Asia, air pollution costs the equivalent of 7.4 percent of regional gross domestic product.

Do you have a plan before city shuts down, the Supreme Court has asked the central government. Solicitor General Ranjit Kumar said he will have to get back to the Supreme Court, and sought two days’ time. Clearly, pollution seems to have crept up unawares on the government even as activists, organisations and individuals have been raising the red flag with increasing urgency.

In Beijing, The Smog Free Project, an air purification tower, runs largely on wind energy and produces material for rings and cufflinks. Is it time for Delhi to look innovative solutions too.

No funds for Qutub centre till August 2015