The luxury hotel association Relais & Chateaux began in 1954 as a collection of luxury lodges sprinkled along the route from Paris to Nice, stopping off points on the “Route du Bonheur” for Parisians heading south to the sun. In the years since, the group has grown exponentially around the world including a culinary Grand Chefs division spotlighting the restaurants considered to be the most influential and prestigious from The French Laundry in the Napa Valley to Eleven Madison Park in New York and Tetsuya’s in Sydney.

A few weeks ago, 500 of these restaurateurs and hotel owners gathered in Berlin for their annual Congress and as they elected a new President, they returned to their roots, selecting Frenchman Philippe Gombert, owner of Chateau de la Treyne in the Southwest of France to succeed Spain’s Jaume Tapies.  But at the same time that they returned the Presidency to the mother country, they signaled  that they wanted to be more active in countries in which they haven’t had much of a presence. They installed  a hotelier from India, Jaisal Singh, owner of  the luxury tented camps Sher Bagh and The Serai, in one of the Vice Presidential slots, demonstrating that they want additional growth in Asia. And they added 36 new members in countries that hadn’t been represented before, such as Hotel Bastion Zadar, Villa Meneghetti and Lesic Dimitri Palace in Croatia and Schloss Hotel Yantarny in Russia, highly designed all. 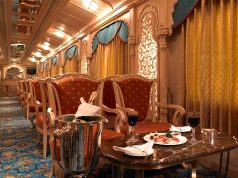 A train fit for Maharajas

On board the Moonbeam

Battle for Asia’s jet-set is hotting up