DELHI: Some meals can just be magical. Of course a number of things must conspire for it to happen. Superlative food is a given, and when convivial company led by an engaging chef new to the city’s scene makes it happen, the results can be truly memorable.

The Le Cirque at Delhi’s opulent Leela Palace, that distant outpost of its New York sibling, needs little introduction to Delhi’s well-heeled culinary aficionados. Ever since its opening at its enviable rooftop location, there has been no looking back. India’s celebrities have come to see and be seen, and fallen for the restaurant’s innovative and lip-smacking cuisine. Every presiding chef at the Leela has the pride and joy of deciphering the food for the guests and delighted them with each succeeding course. Perhaps it will be safe to say that none have quite matched the inventiveness of the latest presiding deity in the kitchen, the new Executive Chef for the Leela, Adrian Mellor.

Over a dreamy five-course, off the menu lunch, a motley group of us discover just what it is we miss out at other times. And just what perfections this affable chef can conjure.

We start off with the compressed apple, soused Japanese mackerel and fennel, with the vegetarians getting pine nuts instead of the mackerel.  As no words can quite capture the plating, it is best to let the visual do their bit. 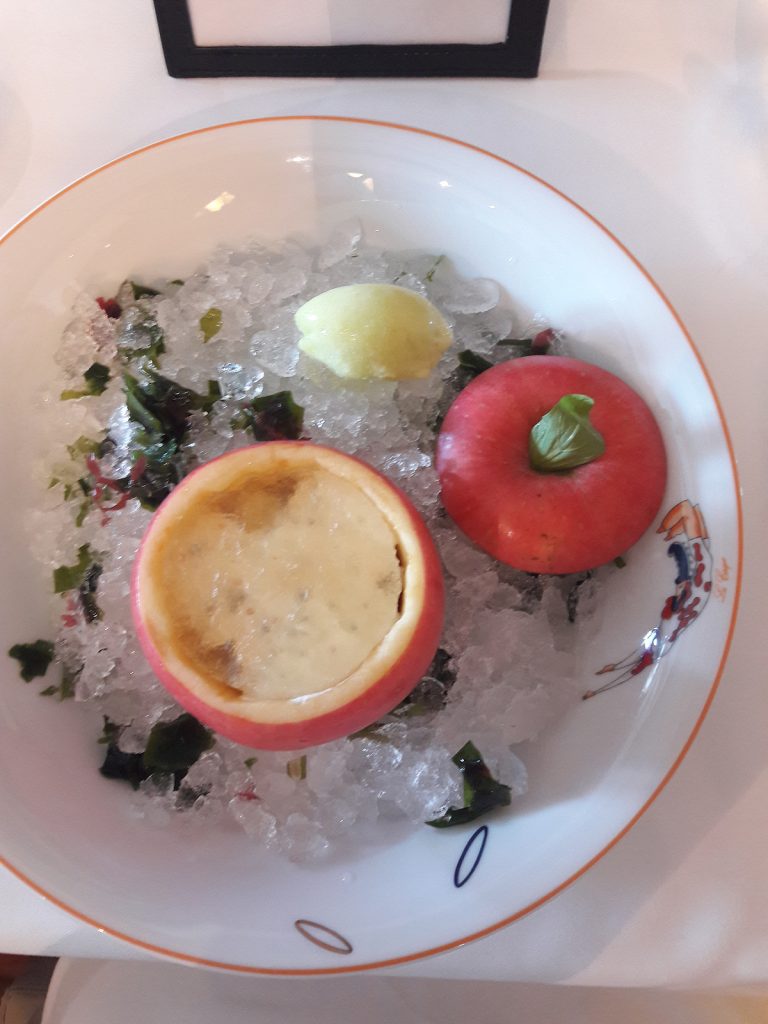 Mellor’s creation had the scooped out apple plated on a bed of ice for that perfect temperature. Inside the texture was melt-in-your-mouth perfect, and more than one person almost asked for an encore!

Mellor started his journey from Oldham, just off Manchester, and there is still that core of a jolly English spirit intact about him, even though he has been globetrotting as part of his chosen profession and settled in the southern Philippine island of Mindanao!

As the next course came in – ravioli with warm egg (pumpkin yolk for the veg diners), King oyster mushrooms and truffle sauce, we learn of his early start to his culinary journey when he started working at an early age of 14 at a restaurant in UK, where peeling and chopping was the chief (and as he says, crucial) training happened. He cites memories such as topping a victoria sandwich making contest in school or seeing a chef shouting at his staff, and realising that this is what he wanted to do!

Even as we tried to pay attention to his further journey, (difficult given just how well the seemingly disparate elements on the dish came together), we learnt of Mellor’s helming some of the finest restaurants at the world’s leading five star hotels, including the Pennyhill Park Hotel, London, as Chef de partie, Waldorf Astoria, Malaysia; The Oberoi Rajvilas, Leela Bangalore and The Peninsula, Manila, among others.

He was also a private chef for the Hashemite ruling house in Jordan’ where he oversaw the official functions of their majesties King Abdullah and Queen Rania. He was part of the launch team at London’s 8 Mount Street restaurant

It easily becomes evident that despite being classically trained, Mellor is an experimenter, an innovator who sees possibilities where I would see none. His mastery over the techniques was enviable, their execution perfect.

“Kitchens are hard places,” he says with a grin, saying he feels sorry for those entering the profession now as the previous rigour is missing now, he feels.

This is amply borne out by the next course, pasta & prawns with chives, garlic and konbu, or edible kelp.

You can just about spot the pasta, artfully tucked below the prawn. Even as we had been sure the pasta would not be topped, the pasta and prawn sent us into a fresh round of rapture. Like every dish till now, this one too was a twist on the classic. Even the vegetarian option, the miso eggplant was just as artfully presented and got its fair share of oohs and aahs.

Mellor insists on quality – how the produce is grown, fertilised, sourced. “These should be important for everyone,” he says.

The guards were down when the main course was announced. And even in this slightly full state, I faced a dilemma. I had been marked for the roasted saddle of lamb, with creamed spinach, fondant potato and natural jus, but I opted for the goat’s cheese and roasted tomato pithivier with wilted spinach and verjus emulsion. A sucker for spinach in any form, i was intrigued by the rest of the dish. And when I finally plumped for the pithivier, a round, closed pie definitely harking back to the chef’s roots, I was so glad to have done so.

Even though I just couldn’t finish it – see above, plus it was very large, it was out of this world perfection and I almost asked for doggy bag, dignity be dammed. The stuffing of goat’s cheese and roasted tomato had combined perfectly. Combining the perfectly baked pastry with the wilted spinach added a further dimension – food pairing within a course.

All that was left was to groan. Even as the mind sent warning signals to get away, we knew there was the dessert in the offing. After much chatter, a few brisk steps (for those who could manage it) and a gap of space-time, we readied ourselves for the final treat – salted caramel souffle, banana tart, stem ginger ice cream.

No, gourmands have little self control, in case you had still not realised. Not especially when Le Cirque decides to bestow favours at this level.

32 trains delayed, 2 cancelled due to fog

Delhi rail museum ties up with Google for virtual tour

A Passage to India