KOCHI
A daily tariff of approximately Rs. 50,000 per person did not deter 87 Indian couples from travelling on board a mega yacht famed globally for its award-winning cuisine and service during the past eight months.

The yacht made its maiden stop-over at Kochi on October 30, eight months since SeaDream India began operating. Savouring the entrapping ambience and dream cuisine of the yacht ‘SeaDream’ were 112 highly affluent guests. They include an Indian couple from Mumbai celebrating their 25th wedding anniversary.

The president of SeaDream Yacht Club India Sudesh Kishore told mediapersons who were taken on a tour of the vessel about how chartering the ship for a week for Rs 3.50 crore is cheaper than a day’s big ticket wedding at a high-end hotel in Mumbai or New Delhi.

Though none from Kerala has so far opted to travel on board, he spoke of how the seafaring culture is catching up across India. “Yachting is new here, unlike in the U.S. where many people prefer yachts to houses.” 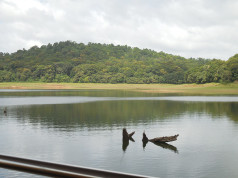