International visitation overall grew 0.9% to a record 7.1 million visitors, outperforming both its projected forecast and inbound travel to the United States as a whole in 2017.

India is an important and rapidly growing market for L.A. Tourism. Indian traveler trends and demands from the market have inspired added efforts to tap the market potential. India’s 2017 performance is extremely encouraging since it reflects the destination’s preference amongst Indians planning trips to the U.S.

“We are powering Los Angeles’ economy to new heights every year, because we know that lasting prosperity means investing boldly in jobs, opportunity, and growth,” said Mayor Garcetti. “The expansion of our travel and tourism sector tells the story of a city whose moment has arrived — and we will continue pushing forward as we expand our role on the world stage, and prepare to welcome the Olympic and Paralympic Games in 2028.”

A contributing factor to L.A.’s year-over- year increase in international visitation is the resonance of a message of welcome. In April 2017, L.A. Tourism launched an initiative called “Everyone is Welcome” which reinforced the city’s cultural diversity and inclusivity.

A recent sentiment study conducted in Australia, the U.K., China and Mexico confirmed the campaign’s effectiveness with positive favorability from each market including a resounding impact on visitation likelihood from China (82%) and Mexico (69%).

“Our ‘Everyone is Welcome’ campaign was the right message at the right time; it was a message of humanity and encouraged people around the globe to see the diversity of L.A.’s faces and places,” said Wooden Jr. “In 2018, we will extend and amplify our message of ‘Welcome’ and intertwine a message of hospitality, fueling even greater momentum towards our north star of 50 million visitors by the year 2020.”

Tourism is among the largest and healthiest contributors to the Los Angeles economy, supporting an average of more than 517,000 jobs in the Leisure &amp; Hospitality sector last year. Estimates show visitors are expected to generate at least $300 million dollars in transient occupancy tax collections for the City of Los Angeles in 2017, a record. These dollars are used to fund local fire, police as well as cultural and recreational services. 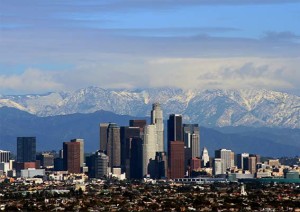 Los Angeles Tourism and Convention Board is a private, non-profit business association whose primary mission is to market and promote Los Angeles as the premier site for leisure travel, meetings and conventions as the City’s official tourism marketing organization.

One of the world’s most dynamic and diverse destinations, Los Angeles is comprised of more than 30 diverse neighborhoods and considered the cultural hub of the Pacific Rim. Home to near-perfect weather, 75 miles of jaw-dropping shoreline, more museums than any other U.S. city and an award-winning culinary scene, Los Angeles presents endless possibilities that keep its more than 47 million annual visitors entertained.