The first hydroelectric project in the district, coming up at Barapol in Ayyankunnu panchayat near Iritty, will be commissioned by the end of this month.

The work of the Rs 120-crore project is in the final stage and almost 96 % of the works have already been completed, said an official. Only some minor equipment are to be installed, which would be completed in the next few days.

The water flow through the canal to run the turbine was successful and the trial run will begin in the next few days to solve last minute glitches, he said.

“Though this is a small project with the capacity of producing only around 36 million units a year, which is hardly equal to the power consumption in the state in a day, the advantage is that the maximum production would be during the rainy season, which would help save the water in the dams like Idukki, and it could be used in the summer,” said Anil G, the executive engineer of the project. 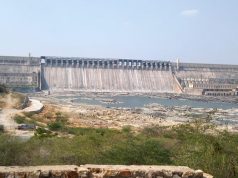 Hydel tourism site to be opened