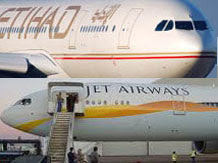 After sailing through the government’s foreign investment approval body FIPB with some riders, the Rs. 2,058-crore deal between Jet Airways and Etihad will be knocking on the doors of capital markets regulator SEBI and fair trade watchdog CCI this week.

Having agreed to various conditions and changes in their original shareholder agreement for Abu Dhabi-based Etihad’s proposed purchase of 24 per cent stake in Naresh Goyal-led Jet, the two companies are hopeful that the deal would pass the muster with the two regulators.

Incidentally, concerns about a possible change in control of Jet Airways in favour of Etihad, with just a 24 per cent stake, were first raised by SEBI and CCI and these became the main reasons for the proposed deal getting stuck for weeks together.