The erstwhile royal city of Jaipur is one of India’s most popular tourism destinations, Capital of the desert state of Rajasthan, a state home to many forts and palaces, it offers a glimpse into India’s royal lifestyle. Known as ‘pink city’ this relatively peaceful city is increasingly also becoming a modern hub of services and industry.

Why should I visit? Jaipur is part of the ‘Golden triangle’, the most visited for most foreign tourists. Jaipur is considered the shopping leg of the circuit, though it abounds in history and culture as well.

What should I know about Jaipur? Jaipur is the capital of Rajasthan, India’s largest state, located to the west of the country. It is a relatively safe city, and the tourism infrastructure here is better than in most Indian cities. Roads are wide, traffic jams outside the old city rare, and people largely helpful. However Rajasthan is also one of the most conservative states in India, and near the bottom among Indians states in parameters like education and gender equality.

Jaipur is a fairly friendly city, and most people value tourists and the fillip it gives to the local economy. Most shopkeepers in local markets are quite friendly and offer you tea / soft drinks as you look through their wares. 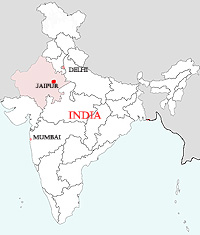 What languages should I know? Hindi would be best, though most places associated with tourism can speak good to a smattering of English.

Where is it? Jaipur is about 250 kilometres south west of Delhi and at the edge of the Thar desert.

What is the best time to visit? December and January are the best months weather wise, though the high season for tourism extends from October to March. Summer is extremely hot, with temperatures in the high 40s C. It is advisable to carry a hat, a sun shade and sun block while visiting the city. It does get cool in the evenings in winter, carry a shawl if visiting in winter.

How is the airport? Jaipur has an international airport, though relatively small and serving only a few airlines and destinations. It is well connected by domestic flights to other parts of India.

Immigration is level 1.
Only 11 nations have visa on arrival in India, rest need prior visas.
Baggage collection is after immigration.
There is a lost baggage counter, in case baggage is missing.
For passengers needing assistance, there are facilities, just let your airline know. Your bag may be security checked, especially as Indian customs is under orders to check gold smuggling. Especially for flights coming from Dubai.
There are information desks, money exchange counters, state and private cab counters.
If arriving at night, beware of anyone trying to over helpful, and do not give your luggage to anyone till you are sure of their credentials. There are extra night charges in cabs.
There are hotels just outside the airport.

You will need a printout of your ticket to enter the terminal and an identity card (passport preferably).
It is safer to arrive at least an hour before flight time for domestic flights, maybe two hours for international flights.
Security is right after the airline counters, not as you are entering the flight.
Money exchange counters are before security gates – they are not permitted inside. Airline counters are generally modern, but ensure your documents (printout of ticket, passport) are in place.
Check hand luggage content and size rules. Some airlines check for size.

What is the best way to reach Jaipur from Delhi? Besides a short flight, the cities are also well connected by rail and road. A number of trains connect the two cities daily, and most trains take about five hours. A highway connects the two cities too, but currently many parts are under upgradation, so the journey is taking longer than usual.

Comfortable Volvo buses operated by Rajasthan Tourism begin from near India Gate in Delhi and from the main bus stand in Jaipur every half hour. Of course private cabs are for hire, and though expensive, offer door to door service.

Where should I stay? Jaipur has hotels catering to every budget. From some of the top ranked palace hotels to budget hotels, they are all in the city.

How do I move about in the city? Private cabs are for hire. Hotels cabs often cost more, check with cabs outside. If you feel adventurous enough, try three wheelers autorickshaws or tuktuks, but again settle your fare before getting in. You can hire both cabs and autos for the day, and it saves much hassle. Within a bazaar or a locality, hop on to a pedal rickshaw. Avoid public buses. A metro line is expected to begin by summer of 2014.

Which 5 things do I have to do?
♦ Visit the Amber and Jaigarh forts, with an elephant ride at the entrance
♦ Stay at a palace hotel (or at least visit one for a meal)
♦ Walk through the old city, taking in the sights and crowds
♦ Shop at Bapu Bazaar for textiles, souveniers, local crafts, silver jewellery – all after bargaining hard
♦ Eat a traditional Rajasthani meal

What should I do if I have more time? Jaipur’s top attractions are history, culture and shopping. Jaipur has a number of forts and palaces, largely dating back to within the last four centuries. The city is named after Maharaja Jai Singh II (1693-1744), who got the Amber and Jaigarh forts built. Visit the forts for a glimpse into how lie was like for residents there. There is an evening sound and light show at Amber Fort. Another fort, Nahargarh, commands an excellent view of the lake.

The current old or walled city came later, and is painted pink by law. The new city spreads largely to the south of this old city.

Another must visit pavilion is Jal Mahal, located in the middle of Man Sagar Lake. If open, do take a boat ride to see the restored interiors. Else walk along the short promenade in the evening to take in the view and the breeze.

An interesting place to visit is the Jantar Mantar, which houses building size medieval time measuring instruments, and is the largest of five astronomical observatories build by Jai Singh, and is now on the UNESCO Heritage List.

Gatore Ki Chattriyan in the old city, houses the tombs of the royal family. Tranquil island.

The most interesting museum is the Anokhi Museum of Hand Printing, also in the walled city. The vast City Palace, also in the old city, has a number of interesting buildings amidst huge courtyards and sprawling lawns.

Many Indians would like to visit Raj Mandir cinema hall, a period piece.

Chokhi Dhani is a replica Rajasthan village a little south of the city. Mass oriented.

If a cricket match is on, visit Sawai Man Singh Stadium.

Polo is a popular activity with the erstwhile royals. There is an active winter polo season in the city still.

What should I eat? While top end hotels serve global cuisines – do not expect same quality though, you must try more local food. In moderation as the local cuisine is very spicy – more so than in many parts of India. Try the thali – which offers an assortment, including dal baati churma – the traditional favourite. Another favourite is laal maas – fire cooked lamb. For breakfast discover kachoris and mirchi vadas! For desserts, try ghevar, feeni, gajak.

Rajasthan government has its own shops which have a standard price. National Handloom too has a lot of crafts etc at very reasonable prices.

The walled city is traditionally laid out, which meant that each profession had a different quarter or lane. Today the most popular ones for shopping are Bapu Bazaar, which has textiles, apparel quilts, cushions, bed covers, and crafts and Johari Bazaar, which has gems and jewellery stores.

More contemporary stores are located in Civil Lines, C -Scheme and Bais Godaam areas. Jaipur now has a number of malls, which cater to more regular as well as touristy needs.

Where should I party? Nightlife is fairly underdeveloped in Jaipur, though most luxury hotels have bars. Try Henry’s the Pub, Polo Lounge and Steam.

What should I be wary of? Personal safety for one. Be wary when in public spaces – of people try to pull a fast one. Cabbies could quote higher rates, shopkeepers will try higher prices, guides will try to take you to specific shops. Also, please keep your belongings eg cash, cards, passport safe always.

Who can I contact in an emergency? For lost documents – most embassies are in Delhi. For medical assistance – Jaipur has large hospitals and local GPs. For theft etc – the nearest cop. And hope for the best.

On which days is movement restricted? National holidays – January 26, August 15 and October 2 – most places – offices and shops – will be closed. Also on festivals such as Diwali, Holi, Christmas, Janamashtami, Id, Buddha Purnima, Dusshera – these have lunar calendar dates which vary – so check.

What is nearby? Besides Delhi and Agra, there are a lot of getaways in Rajasthan. Ajmer, which has a famous dargah and Pushkar a holy site for Hindus are within 3 hours driving distance.

Udaipur, Jodhpur, and the Shekhavati region are other major destinations worth a visit. There are many other smaller cities in Rajasthan which also are worth visiting for the interested visitor.

Ajmer and Pushkar are two religious destinations that are popular with pilgrims.

Rajasthan’s desert is further to the west, if interested visit Jaisalmer for a desert experience.

No headway in efforts to privatise Ahmedabad, Jaipur airports 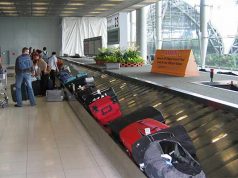