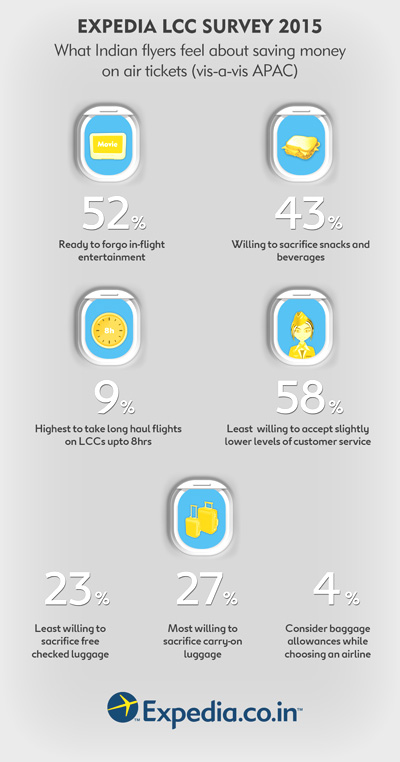 The Expedia group’s Global Tour & Transport team released the latest results of its Low Cost Carrier (LCC) Airline Index, a study conducted by Northstar that examined Asia-Pacific travelers’ attitudes towards LCCs. Spurred by LCC growth, supply in Asia-Pacific is expected to increase by 9.5% year-on-year during March 2015, great news for the 94% of travellers willing to sacrifice perks to save money, according to the study.

The survey examined perceptions regarding customer service and perks between LCCs and traditional carriers and asked about which sacrifices travelers were most willing to make to save money. According to the study, the most important deciding factor when choosing a carrier is the airline’s safety track record.

James Marshall, Sr. Director, Tour & Transport APAC highlighted that “according to the survey,‘saving money’ is ranked second behind ‘airline safety track record’ in terms of being most important when choosing the airline, across gender and age. Men are slightly more willing to sacrifice amenities to save money vis-à-vis women. While a traveler’s age does not make a difference in their willingness to make sacrifices when flying to save money, there are some key differences by age in terms of the sacrifices individuals are willing to make – those under 35 are more likely to give up legroom and carry-on luggage, while those 55+ are more willing to give up full meal service.”

When flying outside Asia, LCCs accounted for 33% of the flights taken by Indian travelers

Vikram Malhi, Managing Director-Asia, Expedia said, “Despite being a highly cost sensitive market, Indians are one of the least willing to accept slightly lower level of customer service to save money (58%) on flights. The general thought behind flying a LCC is to replace their train tickets with a faster mode of travel or a trip with large number of people that could be friends or family.”

“A trend that we have seen with Indians is that some of them are choosing to fly LCCs and then using the money saved to upgrade their hotel/s for the trip”, he added.

• In terms of what they are prepared to give up to save,Indian travelers are most willing to sacrifice in-flight entertainment (52%), full meal service (50%), pillows and blankets (45%), being able to choose seat in advance (46%) and snacks and beverages (43%).
• They are least willing to sacrifice bathroom privileges (18%), legroom (19%) and free checked luggage (23%).

• Only 58% Indian fliers would be willing to accept a slightly lower level of customer service to save money, second lowest in APAC.

• Generally speaking, men are more likely to have travelled on both business and pleasure in the past year (39% vs. 26% respectively).

Booking ‘Flight + Hotel’
• 41% of Indians say they often or always book their hotel and flight together as a package booking – the third highest of the APAC countries surveyed after Taiwan (53%) and South Korea (45%).

• 45% of Indians agree that when booking a flight on a LCC, they splurge on the hotel.

• The broader survey results show those under 35 are more likely than their older counterparts to splurge on a hotel with the savings from their flight.

About the Study
This study was conducted on behalf of Expedia by Northstar, a globally integrated strategic insights consulting firm. The study was conducted among 3,263 adults aged 18 years of age and older in Australia, New Zealand, Japan, South Korea, Hong Kong, India, Malaysia, Philippines, Singapore, Thailand and Taiwan who have flown in the past two years. Surveys were completed online from February 13 to 22, 2015 using the Kantar-owned GMI (Global Market Insite) and Lightspeed Research amalgamated group of panels. Sampling quotas and weighting were used to ensure the sample is representative of the APAC countries represented in terms of age and gender. Assuming a probability sample, the margin of error would be +/-1.7 percentage points, 19 times out of 20.

Major airports may get rid of stamping boarding cards too