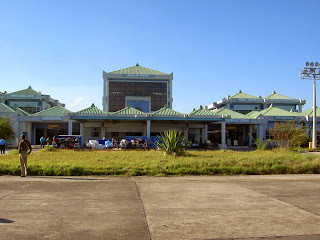 Tulihal airport in Imphal, which had been upgraded to an international one to facilitate the arrival of the foreigners participating in the ten day tourism festival, will have regular international flights. Necessary infrastructures including immigration and customs offices will be opened.

Making this announcement at the sidelines of the inauguration of an international polo tournament in Imphal on Saturday Chief Minister Okram Ibobi Singh said that elected representatives from Myanmar were the first foreign visitors to land at the airport on November 21. If there are regular international flights it will go a long way in promoting tourism.

He also said that the people of Manipur are proud of the fact that polo was originated from Manipur. International polo teams are participating in the tournament held at polo ground in Imphal.

Limited use of aerobridges at Indore airport