KOLKATA: Over 3,000 flyers arrived or departed Kolkata airport on Friday morning, aided by technology that helped flights operate despite a thick blanket of fog.

The advanced instrument landing system (ILS) that has been in place since the start of this month kicked in around 6.30am when visibility plunged and guided 20 planes through the haze without bother,reports The Times of India.

“All scheduled flights operated during a period of low visibility at Kolkata airport utilizing the recently-commissioned CAT III-B ILS. Earlier, arriving flights were made to hover till visibility improved. Sometimes, flights had to be diverted to other airports to refuel. But on Friday, flights operated like a normal day,” said Airports Authority of India (AAI) regional executive director KL Sharma.

Prior to installation of CAT III-B ILS that allows flights to operate till visibility drops below 50 metre, the airport had CAT II ILS that permitted operations till visibility dropped under 350 metre. This led to flight delays and diversions, disrupted airline schedules and greatly inconvenienced fliers.

On Friday, visibility dropped below the 350-metre mark around 6.30am. It then dived sharply to 100 metre where it stayed suspended for an hour before beginning to improve. “The runways were not visible from the ATC tower.

This is the first time controllers carried on with flights during the day using only surveillance equipment: the airport surveillance radar (ASR) to track flights that land and take off and surface movement radar (SMR) to track the aircraft on the ground,” said AAI general manager (air traffic management) BK Sarkar. 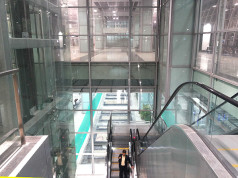 Kolkata to boast its own wax museum

Double decker buses to be reintroduced in Kolkata