MUMBAI: Air travelers transiting through Mumbai were in for a visual treat on Friday. They were greeted by a giant Trimurti made of butter substitute margarine. The statue was made in an attempt to make the World’s ‘Largest Margarine Structure’ on the occasion of Maha Shivratri. 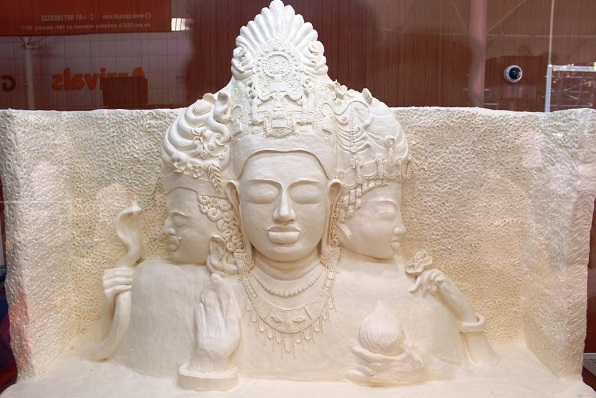 The 1500 kg structure standing 12 ft long, 10 ft broad and 10 ft high, was created with margarine (butter substitute) and displayed in a temperature-controlled glass cubicle at the domestic arrivals at Terminal 1. The theme of the structure reflects the trinity of supreme divinity, in which the cosmic functions of creation, maintenance, and destruction are personified as a triad of deities, Brahma the creator, Vishnu the preserver, and Shiva the transformer.

Chef Devwrat Anand Jategaonkar of India’s Largest Travel Retail Company TFS led the initiative. He is also the first Indian to have won a silver medal for India at IKA Culinary Olympics 2012, held in Germany.

Through this initiative, TFS seeks to provide the travelers a glimpse of the Indian culture, on the auspicious occasion of Maha Shivratri, in line with MIAL’s  representation of its philosophy, architecture and art throughout Terminal 2, said a press release.

Budget 2017 and tourism: Finally taking off?