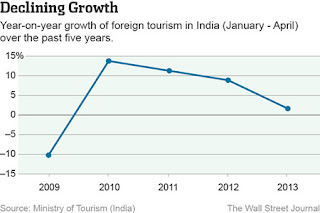 On Friday — following the gang rape of an American woman on holiday in India – the country’s tourism ministry challenged claims that recent attacks on Indian women and foreigners, had hurt tourist numbers.

The ministry argued that fresh data showed the inflow of foreign tourists had risen in the first four months of 2013 compared to the same time last year, contradicting claims from tour operators that bookings had dropped by 25% after the gang rape and subsequent death of a 23-year-old student in Delhi in December.

For sure, overall numbers have risen compared to the same point in 2012. But further analysis showed that the rate at which foreign tourists numbers are growing has slowed drastically over the last year, suggesting India’s popularity as a destination is on the wane.