PANAJI: Police in Goa have arrested a motorcycle taxi driver for allegedly molesting an American tourist on Saturday.

Isidore Fernandes was detained after the woman posted his picture on social media, describing the alleged incident, reports BBC.

She said he asked her for a kiss and when she refused, he tried forcing her hands underneath his clothes.

In her Facebook post on Monday night, the woman said she had hired Mr Fernandes to drive her to dinner. She said he was “friendly” and they chatted as she saw no harm in a having a conversation wit him.

“He forced my hands and took them under his shirt and despite constantly telling him to “keep it professional”, he took my hands further down over his pants,” she wrote.

He allegedly kept turning into lanes, claiming he was taking a shorter route, and then he told her he needed to pull over.

“He stopped his bike and before I could realise what was happening, his penis was in my hands,” she said.

She said she managed to escape – she threw some money at him and ran onto a busy road. 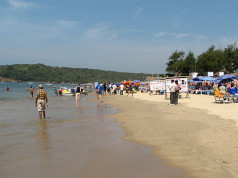