CHICAGO: A 3-foot giant rabbit has died on a United Airlines flight from London, prompting a review at the Chicago-based airline which faced a global backlash this month over its treatment of a passenger who was dragged from his seat.

The 10-month old rabbit named Simon, who was tipped to become one of the world’s largest rabbits, was traveling to O’Hare in Chicago from Britain after a celebrity owner purchased him, reports Reuters.

He was healthy before the flight, according to the rabbit’s breeder.

“Simon had a vets check-up three hours before the flight and was fit as a fiddle,” breeder Annette Edwards told The Sun newspaper. “Something very strange has happened and I want to know what.”

The Continental Giant breed rabbit died in the cargo section of a Boeing 767 after leaving Heathrow, she said.

“I’ve sent rabbits all around the world and nothing like this has happened before,” Edwards, a former Playboy model, was quoted as saying. “The client who bought Simon is very famous. He’s upset.”

United said it was saddened by the news of Simon’s death.

“We were saddened to hear this news,” said United spokesman Kevin Johnston in an emailed response. “We have been in contact with our customer and have offered assistance. We are reviewing this matter.”

“The safety and well being of all the animals that travel with us is of the utmost importance to United Airlines and our PetSafe team,” the United spokesman said.

Earlier this month, a United passenger, Dr. David Dao, was dragged from his seat off a parked plane at O’Hare International Airport bound for Louisville, Kentucky, to make room for crew members.

Video recorded by other passengers showed Dao, a 69-year-old doctor, being dragged down the aisle with blood on his face after refusing to give up his seat on a flight from Chicago to Louisville, Kentucky on April 9.

New rules ensure no United like situation in India 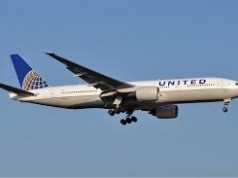 New rules ensure no United like situation in India