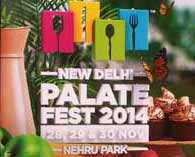 The Palate Fest is a roaring success. Definitely in perception, as organisers Aditi Kapoor and Ruchi Sibal can be sure of a much bigger participation for the next edition, even as they balance bottomlines at leisure.

Organised at Delhi’s sprawling Nehru Park from November 28-30, the inaugural edition of the festival has brought together about 60 participants from Delhi’s food (and some beverage) stakeholders face to face with Delhizens – known for their fondness for food.

So what’s new about a food mela in Delhi? Well, the approach for one. The organisers will not reveal the exact budget, but even a cursory look ensures that no expense has been spared to set a new benchmark in food exhibition standard in Delhi. Modeled on the Taste of London, it is well laid out, clearly demarcated into different functional zones, with maps at all corners. What is the top attraction for any food fest, there a lot of eateries offering the best of their menus. There are also food shops, culinary classes, entertainment in the form of music by popular bands (and distraction for children in the form of segways!). “It is for the entire family,” stress Kapoor and Sibal.

The festival has drawn many a leading hotel and restaurant from not just Delhi and NCR, but even Chandigarh. Hotels that are present include The Oberoi, The Taj Mahal, Lalit, The Park, JW Marriott, Leela Ambience, Sheraton etc.

The list of restaurants is even more extensive. The Hungry Monkey, Kylin, Farzi Café, Choko La, Sucre, Amour, Kylin, Olive, Guppy by ai, Made in Punjab, Hiatus, Le Bistro Du Parc,  Fat Lulu, Habibi’s, The Beer Cafe, Royal China, Sakae Sushi and even Keventer’s, besides many others. More unusual participants include the Embassies of Spain, Turkey and Mexico. Nordic Candie is present, as is Underdoggs. Each restaurant has seating arrangements, some even going up to 40 covers. There are some common seating areas as well. Going by the response, the restaurants are outdoing the hotels in being first choice for diners.

What is most pleasantly surprising to most visitors is the pricing. Almost everything is priced between Rs 100 and Rs 350. The organisers had suggested to the participants that they get about five to 10 dishes at the most and stick to the price advised (though that was not compulsory). “The idea is that people get to sample food at different places,” chorus Kapoor and Sibal.

The festival area covers about 20% of Nehru Park in the heart of the city, divided into zones for picnic, pop-up restaurants, kids’ playing area and a market zone with smaller stalls where you can shop for gourmet jams, organic juices and baked goods.

The festival is pretty democratic too. Kapoor and Sibal have kept it free to enter, and traipse about for any visitor. While this has caught the Nehru Park regular – read diplomats, maids and drivers – by surprise, it is a pleasant one where different classes are meeting, even if inadvertently. The only paid part is the demo zone, where many top chefs of the city have been giving cooking demonstrations.

That the festival is a welcome addition to the city’s cultural calendar is obvious. What is an even better outcome is the exposure it gives to a diverse set of people to the many new cuisines that are setting up shop in Delhi – and not at their basic, dumbed down, Indianised versions but at a sophisticated level. Just how much of a profit the eateries and shops do here is difficult to estimate – they have paid to participate – but they are sure to accrue many new customers who get a taste of what they could expect when they visit the actual premises. If the snooty NFC customer will not go to The Toddy Shop in HKV (oh wake up and learn the lingo – you will need it survive in a couple of years), well the latter is here with is wonderful menu! Chinese, Japanese, Turkish, Lebanese, French, and whole lot of other cuisines are present. The spread of regional cuisines from India is a little less, but then that’s the case with the city too.

Sibal and Kapoor, who had tried their hand at food coupons earlier, say it took over a year to conceive, plan, and execute the programme. “We were very clear that we wanted to do the festival at an international standard.” Minor glitches apart, that goal has most successfully achieved. Persuading New Delhi Municipal Corporation or NDMC, part of India’s infamous red tape culture, would not have been easy, though Sibal and Kapoor say that not only did they agency accept their proposal, they also got on board enthusiastically. While NDMC is charging a fee for renting out premises, participants have rented premises at varying rates according to size and position of enclosures. Some of the private sector players who took more time to come aboard, they say.

There are restrictions of course. Liqour is restricted to wine and beer (and thank the powers that be for that). Logistical challenges include arranging for adequate water and electricity supply. Given the city’s proclivity for creating garbage everywhere, it is a challenge to keep it clean. Parking of course is a nightmare, given that the city authorities refuse to believe that parking capacity needs to increase in the same rate as new vehicles sold. Unfortunately, the nearest metro stations are quite far away – Jor Bagh and INA Market stations, and this is not an area frequented by public transport.

The positives outweigh these momentary challenges. Kapoor and Sibal deserve much success with this initiative, and hopefully will replicate it other cities too. The pleasures of a day in the lovely winter of sun of Delhi with delicious and varied grub in in the midst of nature – such pleasures can rarely be passed up. Or deserve to be.

Delhi-Agra at 160 km/hr on Gatimaan Express