The first national tribal carnival will be held in Delhi from February 12 to 17, 2016 and will be inaugurated by Prime Minister Narendra Modi announced the union Tribal Affairs Minister Jual Oram in New Delhi while addressing the meeting of the Parliamentary consultative committee attached to his Ministry. He said that about three thousand tribals are expected to participate in the event.

Oram said that the carnival will showcase and promote various facets of tribal culture on a large scale. “The underlying idea is to preserve and promote various facets of the tribal life relating to culture, tradition, customs and their skills and to expose it to the general population with a view to utilizing the potential for overall holistic development of the Scheduled Tribes,” he said.

He added, “a pride parade by tribal troupes in traditional attire shall be an added event. The carnival promises to be a mix of art, music, traditional food and one of its kind of non-stop venue for lively entertainment of India’s traditional tribal way of life full of experience and knowledge”.

The Minister said that beside, eminent tribal personalities who excelled in various field i.e sports, art and culture, literature, academic, medicine etc have also been invited. 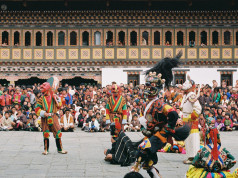 Odisha to allow tourists in tribal areas, with restrictions

Odisha to allow tourists in tribal areas, with restrictions