KOTTAYAM
Tourist inflow to the two tiger reserves in the state, the Periyar Tiger Reserve (PTR) and the Parambikulam Tiger Reserve, has gone down substantially this year due to the rains.

Last year’s monsoon had not affected tourist inflow, as the rainfall was scanty. “Only 1,900 tourists came to the reserves in the last two months. Under normal circumstances, more than 4,000 tourists would have come in a month,” said Vijayanand.

Deputy Director, Parambikulam Tiger Reserve. He said 60 per cent of the revenue had been affected by this trickle.

According to officials, the reserves are waiting for November and December for a better tourist turnout. Both the reserves have chalked out several programmes for tourists including tiger-trekking, bamboo-trekking and boat rides. 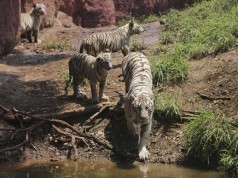 MP to scale up tourism in tiger reserve buffer zones

MP to scale up tourism in tiger reserve buffer zones