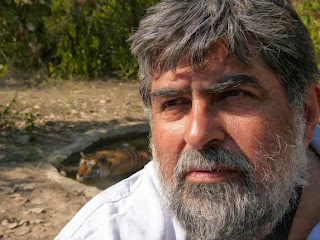 BOOK
Valmik Thapar, whose new book will be out on December 3, talks about how he got involved with the big cat.

Valmik Thapar has spent several decades serving the wild tigers of India. During this time, he has written more than 20 books and made or presented nearly a dozen films for the BBC and several other television networks on the tiger and Indian flora and fauna. He has also established the Ranthambhore Foundation, a non-governmental organisation dedicated to conserving wildlife. Despite having served on government panels and committees relating to nature conservation, he is today a fierce critic of government policy and continues to campaign and fight for new ways to save wild tigers and nature in India. This, he feels, requires partnerships with civil society in villages, towns and cities and a change in the mindset of governments. His latest book, Tiger Fire, brings together the best non-fiction writing, photography and art on the Indian tiger and is also the first time he writes on the tiger from a historical perspective. Excerpts from an interview:

How did you fall in love with tigers?
That is not easily explained, as the power of that emotion is beyond words. In 1976, I was probably open to such an experience but could never have imagined that my love for the tiger would have continued over my lifetime. Basically watching tigers, fighting for them, and looking at their history fills up my senses like nothing else… it has a power over me. This book has been a labour of love and just over three years in the making.