Gatimaan Express was flagged off on Tuesday morning 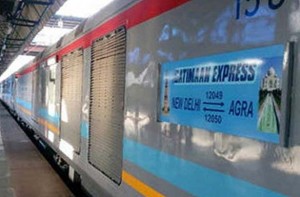 The new train – that can reach a maximum speed of 160 km per hour – will operate between Delhi’s Hazrat Nizamuddin station and Agra Cantonment station. It will run six days a week, except on Fridays.

“The launch of this train heralds a new era of high-speed rail travel in India. Railway Minister has been emphasising about increasing the speed of both passenger and goods trains in his budget speeches,” the ministry said in a statement on April 4.

The railway ministry said that catering on the new train will be carried out by the Indian Railways Catering and Tourism Corporation (IRCTC), a railway undertaking.

“IRCTC has made arrangement for deploying train hostesses on-board the train. This train will see improved catering and will have options of different kinds of cuisines,” the statement added.

Indian Railways already runs the popular Taj Express between the two cities. Gatimaan Express is expected to half the time taken to connect the two popular tourism hubs.