PATHANAMTHITTA: The quiet-flowing Kakkattar, a tributary of the Pampa, is fast turning into an ecotourism destination. 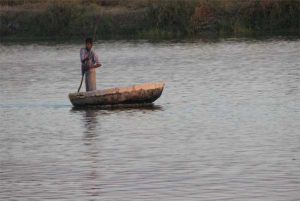 The coracle ride launched by the Seethathode grama panchayat on the Kakkattar at Moozhiyar three months ago has became a good draw, reports The Hindu.

The Seethathode-Gavi Popular Tourism (SGPT) project is the first of its kind to be launched by a grama panchayat in the state.

The project was launched by Ports Minister Kadannappally Ramachandran in June.

The grama panchayat had purchased 16 coracles from Hogenakkal in Karnataka, spending ₹3 lakh from its own fund. The rate fixed by the panchayat for a 1.5-km coracle ride for four persons is ₹400.

Mr. Easow said the panchayat had also opened a tourism facilitation centre at Angamoozhy Junction and an online booking system for the coracle ride would be introduced this month.

The grama panchayat had made a Plan fund allocation of ₹9 lakh for setting up a children’s park and to open refreshment stalls at Angamoozhy, Lekha Suresh, panchayat president, said.

Mr. Easow said the panchayat had given a free hand to the SGPT managing committee to facilitate hassle-free and transparent functioning of the tourism project.

He said the committee was for following responsible tourism at Angamoozhy, which has good ecotourism potential.

Angamoozhy was also deemed as the gateway to the famous ecotourism spot of Gavi.