RAIPUR: Chhattisgarh Government inked a memorandum of understanding (MoU) with the Ministry of Civil Aviation to boost regional air connectivity within the state on September 9.

The MoU was signed at a function this evening at the secretariat in the presence of Union Civil Aviation Minister Ashok Gajapathi Raju and Chhattisgarh Chief Minister Raman Singh, a public relations officer said.

As per the agreement made under the Centre’s Regional Connectivity Scheme (RCS), small airports and airstrips will be developed in phased manner in different cities to facilitate intra-state flight services, he said.

This scheme will cover those cities where flight services have been either discontinued for a long time or could not be started, he said.

In the first phase, Jagdalpur, Ambikapur, Raigarh and Bilaspur (all district headquarters) will get connected to state capital Raipur through air services, the officer added.

Besides, the Centre will provide an opportunity to various aviation companies to start flights on subsidised rates within the state, he said. 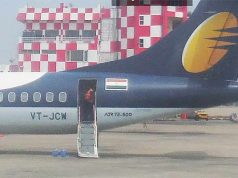 ‘Scheme for regional air connectivity to be launched in a fortnight’