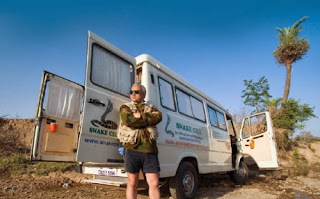 It promises to be a wildlife photography tour like no other. A sand-coloured exterior painted with leaves camouflages the hi-tech caravan in-the-making that would take eight participants on expeditions across Rajasthan, Himachal Pradesh and parts of coastal India.

This custom-made caravan will have a seating capacity of 15. It will also have bunker beds, a kitchen and toilet and be fully air-conditioned. It will also have rooftop tents and a new concept of tray tents. A large LED monitor would display slide shows and help in communication in field locations. The vehicle will also carry Elinchrom strobes and accessories to set up an outdoor studio. Vehicles similar to this one are used by tour companies in the West and in Africa.

And Captain (retd) Suresh Sharma, 52, fondly addressed as Captain by friends, is the one-man army behind it all. He conceived the Green Dot Express to take travellers to exotic locales, where they can network with other wildlife and photography enthusiasts. World’s chefs to meet at Chandigarh