AGRA:  To boost tourism in Agra, the Tourism Guild of Agra, an association of hotel and emporium owners, has mooted a proposal to ply boats in Yamuna in Taj Mahal’s backyard for tourists.

According to the proposal, the guild plans to ply boats from Dashera Ghat near Taj’s east gate to Egyarah Sheedi, located 1.5 km away, between the months of October and March (tourist season) reports The Times of India.

Small pedal boats would be put into service. The district administration has sought a detailed project report in this regard, UP tourism officials said.

Agra has been seeing a declining number of tourists, especially inbound tourists in recent years. Most top end hotels have been trying to boost the number of visitors, many of whom do not spend even one night in this historic city.

Talking to TOI, Rajiv Saxena, secretary of the guild, said, “We have given a proposal to the district magistrate. He has asked for a comprehensive proposal which includes timings, the area where it will run and what safety measure would be in place and the kind of boats to be used.”

Saxena added that the guild would now look for the suitable vendor who could run this project. After this the administration will seek requisite permissions from the authorities concerned. The administration has assured to provide all support to make this venture a success.

“The aim of the project is to make tourists visit to the city more enjoyable. Taj’s backdrop would be the perfect setting for this venture and we are hopeful that a large number of tourists would like to take a ride. Not much arrangements are need to be made as far as water level in the river is concerned. Only jetty would be required to build at both ends of the ride” he added.

About the chopper service between Taj Mahal and Fatehpur Sikri, Saxena informed that the issue had already been discussed with the chief minister Akhilesh Yadav during a meeting of UP tourism board.

The helicopter would take off from an already existing helipad at a luxury hotel nearby and land at a designated place near the Sikri fort. 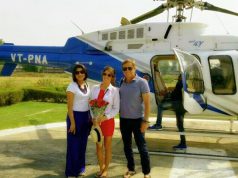 GoChoppers aims to raise $10-15 million in a year

No interest in Agra beyond the Taj