Bangalore, now officially Bengaluru, is one of India’s leading cities. Located in the southern state of Karnataka, it is regarded to the IT and biotech hub of India. It is also one of India’s most cosmopolitan and liberal cities, known as much for its traditional ways of life as its trendy pubs and multi cuisine dining options.

Why should I visit? Bangalore, now officially Bengaluru, has currently become India’s IT and biotech hub, but the city has had a longer history than that. An important part of the erstwhile Mysore kingdom, it is today a major gateway to the region.

What should I know about Bengaluru? Bengaluru is the capital city of Karnataka. Bangalore is India’s third most populous city, and increasingly regarded to be India’s third most important city. It has a population of about 8 million, including suburbs, and is growing fast. Bangalore is known as the ‘Silicon Valley of India’ due to its role as the nation’s leading information technology hub. The city is amongst the top ten preferred entrepreneurial cities globally. 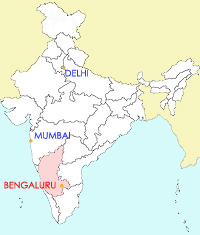 It is also a popular test market for many brands, and you are more likely a more cosmopolitan culture here than in many cities of India. Bengaluru once had a large Anglo-Indian population, the second largest after Kolkata, and many vestiges of that culture remain. The city was known as ‘garden city’ and ‘retirement city’ before its current growth spurt. Central Bangalore is the traditional hub of the city. The newer sectors are usually in suburbs surrounding the main city.

What languages should I know? Kannada is the local lingua franca. However all establishments catering to the upper segments speak English. Hindi, Tamil, Telugu and Malayalam are also fairly widely understood. Most signage is in Kannada and English.

What is the best time to visit? Bengaluru is known for its pleasant climate throughout the year, though in the past decade, summers have begun to get hotter.

How is the airport? KGIA is India’s third busiest airport. The new airport opened in 2008, and has recently been expanded. The airport is connected by decent public buses. There are a number o private and public cab services. The airport is a fairly busy one, and hosts all major domestic airlines and 21 international airlines. There are flights to about 50 destinations, including small ones within the state.

While arriving:
Immigration is level 1.
Only 11 nations have visa on arrival in India, rest need prior visas.
Baggage collection is after immigration. There is a lost baggage counter, in case baggage is missing.
For passengers needing assistance, there are facilities, just let your airline know.
Your bag may be security checked, especially as Indian customs is under orders to check gold smuggling. Especially for flights coming from Dubai.
There are lounges at the airport.
There are information desks, money exchange counters, state and private cab counters. If arriving at night, beware of anyone trying to over helpful, and do not give your luggage to anyone till you are sure of their credentials. There are extra night charges in cabs.
There are a number of buses going to the city centre, at all hours. 40 of these buses are air-conditioned Volvo buses, called Vayu Vajra. While clean and safe, they drop passengers only at designated stops, so the last part may require another mode of transport if far away. Costs between $1-5. Self drive car service also available but obviously for those confident about navigating the city on their own.

To depart:
You will need a printout of your ticket to enter the terminal and an identity card (passport preferably). There are counters on the outside of the departure entry for all airlines, in case you have queries.
It is safer to arrive at least an hour before flight time for domestic flights, maybe two hours for international flights.
Security is right after the airline counters, not as you are entering the flight.
Money exchange counters are before security gates – they are not permitted inside.
Airline counters are generally modern, but ensure your documents (printout of ticket, passport) are in place.
Check hand luggage content and size rules. Some airlines check for size.

There are auto rickshaws or tuktuks too, much cheaper than cabs (much less comfortable too) – though dealing with them can be challenge as they often do not speak English, and do not go by meter. They will tend to overcharge, though this may still cost less than a cab journey. Insist on going by meter.

Bangalore has a multitude of bus services, often confusing. A rather rickety public bus service exists but is not advised for tourists. There is a Vajra bus service, red Volvo buses, which are slightly more expensive, but advisable.

However the city also is developing its metro system – Namma Metro. A 7 kilometres stretch from Bayappanahalli to MG Road is open, while another 10 kilometres stretch from Malleswaram to Peenya is to open any time now. Streets in the centre of the city are narrow and clogged, and usually one way. In case, your destination is just across the road, just get down and cross the road.

Bangalore is well connected by rail to most cities in Karnataka, as well as with other major cities in India. The city has two major stations, and a number of smaller ones. Private bus services also connect the city to places like Hyderabad, Bombay, Mysore and Goa. Redbus is a popular service, though there are many others.

Which 5 things do I have to do?
Stroll through Lal Bagh and Cubbon Park
Visit Vidhan Soudha
Tipu Sultan’s Palace
Catch a show at Rangashankara
Take a cycling trip of the city

What should I do if I have more time?
Bangalore is not a touristy city. There is not much to see historically. An old building is Tipu Sultan’s Palace, a former summer retreat made of wood with some fine carvings. An old temple nearby is Venkataramana Swamy Temple.

A popular stop is the seat of the state government, Vidhana Soudha, made in Dravidian style architecture.

The Bull Temple in Basavanagudi is a typical Dravidian style temple, famous for its mammoth bull statue that was carved from a single boulder. The city has many other temples, and most traditional localities will have temples.

Bangalore’s traffic has increased exponentially in the past few years. However, the city’s fairly pleasant climate means one can walk or cycle around the city (latter totally unadvisable in crowded areas). There are a number of walkers clubs, that might be more feasible.

Two famous parks contributed majorly to Bengaluru’s reputation as a garden city. Lalbagh Botanical Garden is at the centre of the city. For plant lovers, it has a rare tropical and sub-tropical trees and plants, and a glasshouse resembling the one at London’s Crystal Palace. The nearby Cubbon Park an oasis in the middle, good for lazy, pleasant stroll or hangout any time.

An unusual, and by India standards expensive attraction is Bangalore Palace, which has Tudor style architecture inspired from London’s Windsor Castle.

To catch glimpses of the old town, and its life, visit areas such as Basavangudi, and Malleswaram – still relatively old world.

Given its plateau location, rock climbing opportunities exist in multiple locations around the city.

The city has number of lakes – not well maintained but pleasant for a stroll. Try Ulsoor Lake.

What should I eat?
Bangalore has excellent dining options, cutting across price ranges.

Koshy’s is Bangalore’s staple favourite for generations – simple traditional fare, consistently good food, it now has an air conditioned section as well.
Karavalli at Taj Gateway is an excellent choice for south Indian style seafood.
Mavalli Tiffin Room (MTR) at Lalbagh Road is an old, traditional breakfast/lunch/tiffin place.
Adiga’s is a popular chain of fast food and fine dining restaurants.
Corner House is a chain specially known for their icecreams.
Samarkand in Gem Plaza is known for its north west frontier food.
I.T-alia at the Park has great Italian food.
Olive Beach, Wood Street for Italian too.
Ente Keralam, a chain, offers great Kerala cuisine.
Cafe Coffee Day began from here, and has the largest number of outlets in this city

What should I buy? Bengaluru offers both traditional markets and malls. MG Road, Brigade Road, Commercial Street are traditional shopping areas. The UB City is the most famous mall, housing many luxury brands. Forum malls are popular, as are InOrbit and Mantri Square.

Where should I party? The city is full of bars and pubs, much more than in any other Indian city. Closing times are a little early, check before you go.

What should I be wary of? Within India, Bengaluru is a relatively safe city. The city is also quite liberal in its attitude compared to many Indian cities, resulting in better treatment of women and less staring. Auto drivers will try to take advantage if they sense you are not from the city. There are also pickpockets in crowded shopping areas.

What is the phone city code? To dial Bengaluru from outside, dial country code: 91 City code: 80.

What local cultural experiences can I access? Bengaluru is rich in traditional arts and crafts, and there are many practitioners as well as schools / institutes that conduct programmes – long and short term.

Nrityagram, a dance school in Hessaraghatta was established by danseuse Protima Bedi. You can watch traditional dancers.

Karnataka Chitrakala Parishat is a famous school of art. Tranquil, it has a gallery, a museum and a store.

What is nearby? Bengaluru’s main tourist attractions lie outside the city.

Nandi Hills is a beautiful hill fortress that was once a retreat for Tipu Sultan. It is 60 kilometres north of the city.

Shivaganga is a hill with four faces and a height of 4,600 feet. It is located 56 kilometres from the city.

Channapatna, 60 kilometres on the way to Mysore, is famous for its beautiful traditional wooden toys.

A little further away is the historic town of Mysore, with its impressive palace, laid back lifestyle, ruins of Shrirangapattana and the Ranganathittu bird sanctuary.

123 kilometres north in Andhra Pradesh is Lepakshi, which has a beautiful Veerabhadraswamy Temple and India’s largest monolithic granite Nandi.

Karnataka fails to ride the ‘tourist’ bus to coronation