DELHI: Air India is planning to raise USD 555 million by way of bridge loan for the purchase of three Boeing aircraft, according to a tender document.

The disinvestment-bound national carrier would be taking delivery of three B777-300 ER planes early next year, reports PTI. 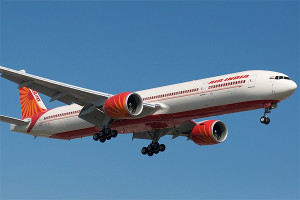 Now, the airline has sought offers “banks/ financial institutions to arrange a bridge financing up to USD 555 million for financing the acquisition of the three B777-300 ER aircraft to be drawn equally at the time of taking delivery of the aircraft,” the document said.

At current exchange rate, the amount would be around Rs 3,594 crore.

Two of the aircraft are to be delivered in January and the remaining one in February.
As per the purchase agreement with Boeing, Air India is to buy 15 B777-300 ER aircraft and it has already taken deliver of 12 such planes.

Of these, the state-run carrier has already taken the delivery of 65 planes.
At present, the flagship airline has a fleet of 115 aircraft.

“Government of India has indicated that they would issue its guarantee for the bridge financing of B777-300ER aircraft for a period of 12 months or till the date the loan is refinanced whichever is earlier,” the document said.