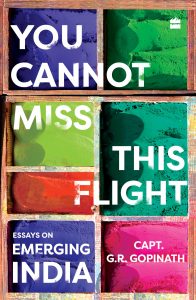 BENGALURU: Captain GR Gopinath has often been credited with making the dream of flying accessible to thousands of Indians, with the launch of his erstwhile Air Deccan.

His journey from the remote parts of Karnataka to ruling the skies, albeit briefly, has generated much interest, reports The Economic Times.

At a business literature festival in Bengaluru a few months ago, Gopinath spoke about penning his story and confessed to what he found the hardest.

“Autobiographies are difficult in the sense that it is not possible to be entirely honest. I do not think that any autobiography can bare all. In probably whole of history, there are hardly any, except maybe one or two,” he said. “Especially some of the sins that we commit. I don’t think we have the courage to write all of that. When I say sins, not only in actions but in thought,” he added.

In that letter, Gandhi was referring to a woman, also married, in the ashram. “Rajagopalachari said I can’t even hold this letter. ‘What will happen if the country found out that you [Gandhi] are even thinking these thoughts?’ So in that sense, even Gandhiji’s autobiography is not a bare all,” Gopinath said.