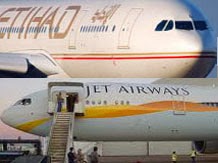 DELHI
National carrier Air India was not provided some important information on the Jet-Etihad deal when it was framing its reply to the competition regulator’s directive to comment on the proposed alliance’s impact on the Indian aviation market, according to documents reviewed by ET.

On November 8, four days before the Competition Commission of India (CCI) cleared Jet Airway’s plan of selling 24% stake to Abu Dhabi-based Etihad Airways, Air India had written to the regulator saying that it had not provided some crucial documents pertaining to the deal, including the shareholder agreement and the commercial co-operation agreement.

The letter, a copy of which was reviewed by ET, is part of the competition regulator’s reply to an RTI application filed by former Air India executive director Jitendra Bhargava. Last month, Bhargava had appealed against the CCI clearance, alleging that the deal would adversely impact competition in India.

Air India to be sold in ‘debt-free’ parts to different buyers:...