DELHI: Montenegro, Bhutan, Japan, Greece, Vietnam and more – all in a single trip – ‘Amanjunkies’ could hardly have asked for more. Aman has launched an exclusive Private Jet Expedition with the world’s foremost luxury travel designer, Remote Lands from 15 April to 6 May 2018.

This extraordinary journey will see just 16 guests journey in consummate comfort aboard an Airbus ACJ 319 to nine countries in 22 days, to discover their rich cultures and outstanding natural beauty.

Destinations include Aman Tokyo in Japan, Amanyangyun in China, Amanoi in Vietnam, Amanpuri in Thailand, Amankora’s Paro and Thimphu lodges in Bhutan, Amanbagh in India, Amanzoe in Greece, Aman Sveti Stefan in Montenegro and Aman Venice in Italy.

This exceptional journey begins on 15 April, 2018.

Taking in bustling cities, lofty mountain peaks, idyllic beaches and spiritual havens, guests will be taken on an adventure to explore an array of destinations in the Aman way.

The Airbus, originally designed for 126 passengers, has been refitted for just 16 offering living rooms with sumptuous leather seats that fold completely flat, bedrooms and bathrooms with showers.

While time in the air will be swift and infinitely cossetting, days will pass languidly amid drifting cherry blossoms in Japan, swimming in Phuket’s Andaman Sea, trekking in the Himalayas or floating dreamily down Venice’s Grand Canal. Nights will be spent in unrivalled opulence at a selection of signature Aman destinations, with elegant cocktail and dinner parties throughout the adventure providing opportunities for guests to mingle.

Every couple or solo traveller, however will have their own private car, driver and guide for all transfers and excursions, ensuring privacy and solitude whenever needed.

ACROSS THE WORLD
This exceptional journey begins with three nights in Tokyo, amid Sakura season, when the city turns a shade of pink by the flowering of its cherry blossoms. Aman Tokyo offers sushi-making classes, lessons in the sword-fighting martial art known as laido and tea ceremonies, as well as private guided tours of the city’s finest attractions including Tsukiji Fish Market, the widely recognised Asakusa restaurant and the Imperial Palace Gardens.

Amanyangyun., the group’s opening slated for Autumn this year, is the next stop. It is set on 100 acres in a forest of giant camphor trees on the outskirts of Shanghai for a two-night stay (18 – 20 April).

This is followed by a blissful beachside idyll on the remote shores of the East Sea on Vietnam’s dramatic coastline for a two-night stay (20– 22 April).  Backed by the vast wilderness of Nui Chua National Park and renowned for its crystal seas and pearly white sand, Vinh Hy Bay is home to Amanoi, a resort that is a destination unto itself, with standalone guest pavilions riding a ridge with views either of the ocean or the National Park’s undulating hills.

Next is another destination unto itself, Amanpuri, which claims a private peninsula on Phuket’s lauded west coast, its graceful Ayutthaya-inspired rooflines peeking through coconut palms above a beach, lapped by the Andaman Sea. Amanpuri’s gastronomic fare is second to none, from authentic Thai cuisine incorporating Phuket’s abundance of natural produce to create fragrant curries and Thai salads to Nama, Aman’s first culinary concept and Japanese restaurant celebrating Japan’s UNESCO-recognised tradition of Washoku during their stay (22 – 24 April).

Next come four days (24 – 28 April) in Bhutan, and a chance to experience two G2000 – smaller private jets. Situated in a blue pine forest in the upper reaches of the Motithang area, the 16-suite Amankora Thimphu is close to the capital’s sights and shopping, whilst remaining a quiet retreat. Amankora Paro rests on the brush-covered hills of Paro Valley, near some of Bhutan’s most treasured historical sites including Taktsang, the fabled Tiger’s Nest Monastery.

A two-day stay in the palatial haveli estate of Amanbagh in India is next on itinerary. Marble floors, domed cupolas, lush gardens, colourful villages and ancient ruins all contribute to setting a scene that could be drawn from centuries past, with gracious modern touches ensuring supreme comfort over the two-night stay (28 – 30 April).

Onwards to Greece, and back in the Airbus. On arrival in Athens, helicopters await for the short flight from the capital to Amanzoe in the hills of the Peloponnese. During the two-night stay (30 April – 2 May) guests can cruise the azure waters of the Argo-Saronic Gulf to Spetses to stroll the historic car-free streets and enjoy an exquisite seafood lunch in a local taverna. 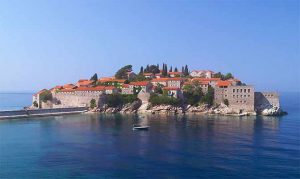 The next destination is Montenegro’s iconic islet of Sveti Stefan for a two-night stay (2 – 4 May). Incorporating a once fortified fishing village dating back to the 15th century on an islet, Villa Milocer – the former summer residence of Montenegrin royalty, a free-standing Aman Spa and multiple pink-hued beaches, Aman Sveti Stefan lies close to many of the country’s premier attractions.

Day 20 of the expedition takes guests to their final destination, Venice, delivering them into the gracious embrace of a 16th century palazzo on the Grand Canal for the final two nights (4 – 6 May) of the expedition. As sumptuous and romantic as the city itself, Aman Venice is home to museum-quality treasures including Tiepolo frescoes, Sansovino fireplaces, gilded ceilings and centuries-old leather wall coverings.  The expedition’s final dinner will be held in one of the palazzo’s opulent dining rooms, overlooking the Grand Canal as it reflects the setting sun.